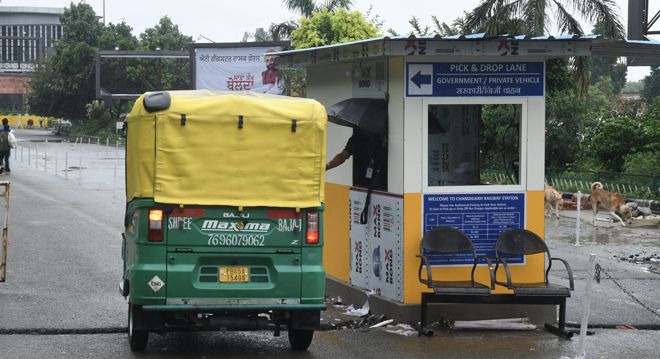 While the order allowing a six-minute window to vehicles for free pick up or drop off at the Chandigarh Railway Station gate is aimed at easing congestion, commuters feel there is a need to stretch the window, besides lowering the exorbitant charges levied for a longer halt.

Many visitors rue the free window, especially at the time of arrival and departure of trains, is too small, given the high volume of passengers arriving at the railway station in cars or auto-rickshaws with luggage. A majority of them wants the cap to be extended to 10 minutes to facilitate car drivers.

“Allowing a six-minute free passage is too less as a large number of vehicles arrive at the railway station within a short span. It takes time to remove or load the luggage. The free window needs to be stretched,” says Vishal, a Sector 38 resident and a frequent visitor to the railway station.

While asserting the move to charge fee from those parking vehicles for longer periods will help ease chaos, often caused by parked e-rickshaws, autos and cabs, they say charging hefty fee for breaching the window was no solution.

Situation to ease with awareness, Higher-ups may review fee

The situation will ease as people get aware about new system. Higher-ups may consider the demand for lowering of fee after assessment. — JP Singh, Superintendent, Chandigarh Railway Station

“Charging Rs 200 for up to 30-minute halt and Rs 1,000 for over 30 minutes is unrealistic. The authorities should reconsider their decision and rationalise the fee to make it more affordable for people,” says Om Parkash, another city resident.

Visitors to the railway station say there is no mechanism in place to ensure vehicles get a clear passage to pick up or drop off passengers and leave within six minutes.

“The rush often leads to arguments and even fights among drivers, who blame one another for the delay,” says Ankit, another visitor.

JP Singh, Superintendent, Chandigarh Railway Station, says the system has been streamlined and there was hardly any rush today.

“The situation will ease as people get aware about the new system. As for stretching the six-minute window, the higher authorities may consider the demand after monitoring the situation,” he says

The decision regarding charges is to be taken by the higher-ups who have signed the contract with the contractor, he adds.

As per the new system, commercial and non-commercial vehicles coming to the railway station gate will be exempt from paying the parking fee only for the first six minutes, while Rs 50 will be charged for up to 15 minutes, Rs 200 for up to 30 minutes and Rs 1,000 for over 30 minutes.