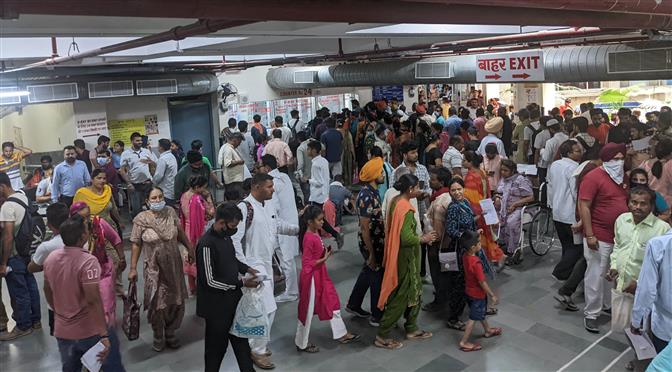 The Post-Graduate Institute of Medical Education and Research (PGIMER) here today resumed the treatment of Punjab patients under the Ayushman Bharat Yojana after the Union Government directed the institute to restart the benefits in the interest of patient’s welfare.

Kumar Gaurav Dhawan, Deputy Director (Administration) and official spokesperson, said: “The PGIMER has taken this decision on the directives from the offices of the Prime Minister and Union Health Minister to restart the programme so that patients do not suffer. A communication has also been received from the Secretary Health, Government of Punjab, stating in the next few days, all pending dues will be cleared.”

Decision comes on directives from the offices of PM & Union Health Minister. Authorities must address the issue to enable us to sustain our decision. —Kumar Gaurav Dhawan, PGI spokesperson

“For the institute, patient care is the top-most priority. We have restarted extending the benefits of Ayushman Bharat scheme to beneficiaries from Punjab from today so that patients do not suffer. We earnestly request the competent authorities to address the issue at the earliest to enable us to sustain our decision taken only in the interest of our patients’ well being,” he added.

Along with the PGIMER, other Chandigarh government hospitals, including GMCH-32 and GMSH-16, have also decided to resume the benefits under the scheme from Monday.

“Patients from Punjab will be accepted under the insurance scheme for treatment at the hospitals of the Chandigarh Administration from Monday onwards. The status of outstanding dues will be reviewed after 15 days,” said Chandigarh Health Secretary Yashpal Garg.

Requesting Garg to resume service, Punjab Health Secretary Ajoy Sharma on Friday wrote: “As you are aware insurance company SBIGIC has failed to honour the claims for the treatment provided by hospitals under Ayushman Bharat Mukh Mantri Sehat Bima Yojana. I am happy to share the Department of Finance, Punjab, has released funds for payment of these outstanding dues, at the risk and cost of the company. The department has further committed to release dues for future claims as well. May I request you to start accepting patients from Punjab covered under the scheme. In the next few days, all pending dues will be cleared.”

The PGIMER was constrained to stop the benefits of the Ayushman Bharat scheme to beneficiaries from Punjab from August 1 after pending claims exceeded Rs 15 crore. However, people from Punjab continued to seek treatment at the institute as regular patients by paying the user charges or under other applicable welfare schemes, if so eligible.

After the PGIMER stopped treating thousands of Punjab patients from availing benefits of free treatment, the Finance Department of Punjab had sanctioned Rs 100 crore for the PGIMER and other government hospitals in Punjab and Chandigarh (including GMCH-32 and GMSH-16).

Rs 5L per family per year cover to Punjab residents. Cashless and paperless treatment is available at government and empanelled private hospitals.