Polybags out as soon as inspection team leaves Sector 26 market 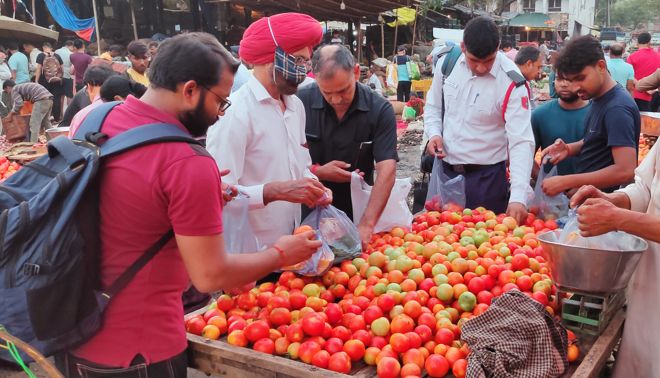 A vendor offers polybags to customers at the vegetable market in Sector 26, Chandigarh. Pradeep Tewari

The first day of the Centre-imposed ban on single-use plastic items witnessed poor implementation on the ground, as traders and commercial establishments violated the restrictions with impunity.

The Centre had banned manufacture, sale and use of identified single-use plastic items such as plates, cups, straws, trays, and polystyrene from July 1. However, a visit to the vegetable market in Sector 26 revealed open use of polythene bags, without any fear of penalty.

Government should have provided a cheaper alternative for carry bags as biodegradable ones are quite costly. —Trader at vegetable market, Sector 26

Teams of the Chandigarh Pollution Control Committee and MC are conducting regular inspections and raising awareness in city. —UT official

A trader at the market said the authorities should catch the suppliers and manufacturers of polythene bags first. Before imposing a ban on single-use plastic, the government should have provided a cheaper alternative for carry bags as the biodegradable ones currently available were quite costly, he said.

A team of officials visited the market in the morning to look for violations, but shopkeepers concealed their polythene bags and used these after it left, he said.

Amanpreet Kaur, a resident of Sector 27, said before enforcing the ban, the government should have come up with a viable replacement.

An official of the UT Administration said teams of the Chandigarh Pollution Control Committee (CPCC) and municipal corporation were conducting regular inspections and awareness activities in the city. Banned single-use items were seized in raids on two dealers in Sector 26 in January and at Industrial Area in March. The action against the violators had been taken under the provision of the Environment (Protection) Act. He further said in March, the CPCC had sealed eight shops for violating the ban.

Meanwhile, MC employees today vowed not to use single-use plastic items. They pledged to reduce use of plastic and educate peers, neighbours, family and community members about the impact of plastic waste on the local environment. The employees pledged to shun plastic bottles, bags and related products that were harmful to the environment and promote use of steel or glass bottles, cloth bags, eco-friendly products to make Chandigarh more environmentally friendly.