Politicians, bureaucrats should get jab to build confidence

Do away with registration, allow walk-in vaccination, find methods to increase sites; counselling holds the key 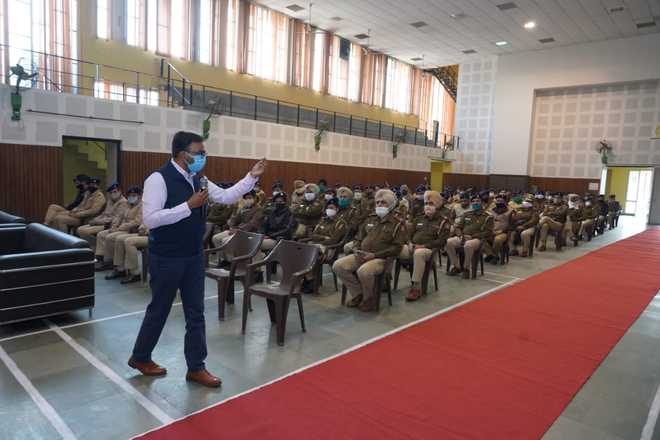 Cops being sensitised to the Covid vaccine. File photo

Open house: how can authorities deal with indecisiveness towards Covid vaccine?

The Covid-19 vaccine has been getting a tepid response because of trust deficit. The onus is on senior doctors and medical officers, including the UT Administrator and his team, to come forward to receive the jab. There need not be any prior registration and health workers can simply visit the area to get the shot and opening up more channels for vaccination. An awareness campaign with counselling to override vaccine hesitancy must start immediately.

Deal with lack of trust, confusion

Increased vaccine hesitancy is due to the confusion among people regarding efficiency and safety for public acceptability. The Administration needs to tend to lack of trust among people towards the process and system. Lack of communication, rumours and conspiracy theories erode confidence. Communicating empathetically and proactively will build trust among public.

In view of the increasing Covid cases in other states, should the UT Administration take pre-emptive measures to prevent a second surge in the city?

Fear of side effects

VVIPs should take the shot

As per general observations, people have different doubts about the vaccine. They say the initiation of drive is a step taken by the government in haste without taking into consideration the reverse affects that may appear after a gap of time. Their most relevant question is why the VVIP or other dignitaries are not coming forward to take the shots? Therefore, notable persons should come forward to set an example.

Even though the city has educated population, hesitation for inoculation has been worrisome. The Administration must make people aware of getting themselves vaccinated.

Centre, states must work together

Despite the fact that adverse events following vaccination have been negligible, the vaccine turnout has been low in the city. Hospitals have begun persuading senior doctors to get a shot to “build confidence” and in the government offices, not opting for a vaccine amounts to “dereliction in duty”. The declining trend in the new cases as well as the knowledge that an array of vaccines will be available in the months ahead further contribute to the temporary ‘hesitancy’ pervading hospitals now. There should also be greater coordination between the Centre and the states on sharing, investigating and publicising reasons for hesitancy.

The only reason for vaccine hesitancy is the fear of side effects. If surety regarding these was established, people would have come forward to get themselves vaccinated. A majority of the population are waiting for the results of the vaccination by observing the health of people who have already been vaccinated.

Vaccine hesitancy among people is because of the “infodemic” against the Covid vaccine. Because of the side effects such as as mild fever, pain on the site of jab, nausea, headache, breathlessness and chest pain being highlighted, a lot of anxiety is being created among healthcare workers and public at large. But actually these symptoms are a good sign, because it means the immune system of body is reacting to the vaccine and creating antibodies. Awareness campaigns must be launched to remove hesitancy.

The cause of vaccine hesitancy is that the medicine is under trial and secondly, there are multiple medicines in the market and the efficacy of all of them is not up to the mark.

Those vaccinated may encourage others

Mild reaction after vaccination is a good sign as the immune system of the body reacts to the vaccine creating antibodies. After initial hiccups and hesitancy, the mission will gain pace sooner than later. Motivation and wide education is the key to overcome it. Only those health workers already vaccinated, should be involved in the drive as they will motivate others with an example to shun hesitancy. The communication (text message) specifying time and place for the receiver to get vaccinated needs to be interactive so as to confirm compliance or fix some other suitable slot. Voluntary self-registration among the targeted category should be encouraged. There should be no cause for despair as vaccination against Covid-19 is set to be a regular feature of healthcare like other vital vaccinations.

There is a tendency among people to take Covid lightly. Authorities should make vaccination compulsory as per the procedure. There should be no relaxation on this issue keeping the health of public at large.

People may not be getting themselves vaccinated because it is not mandatory and since positivity rate has come down, they do not feel an immediate need for the vaccine. A lot of apprehensions also surround the safety of the vaccine. The authorities should hold counseling sessions. Employees who have received vaccine should share their experiences.

The information on Covid-19 vaccination is insufficient. The authorities need to clean the air on the subject because no one wants to put his/her life at risk. Everyone must take primary safety measures to be safe and healthy as the virus still exists.

The indifferent attitude of people residing in the UT may be the reason behind their extant hesitancy towards the Covid vaccine. People need to know that Covid vaccine is meant purely for some preventive purposes and safety alone can save us from its dreaded clutches.

Till date, adverse events have not been reported. People should be told about the benefit of vaccination. For making the drive a success, open spaces at schools, colleges and community centres should be utilised.

Most of the stage I and stage II class of beneficiaries are hesitant to come forward for the Covid-19 vaccination. Whereas, they being the responsible class, are not only expected to get themselves vaccinated as per the protocol, but also need to play a bigger role to encourage general public in this regard.

The first and the foremost reason for hesitancy regarding Covid-19 vaccine is lack of awareness among people. There must be a curb on rumours at all social media platforms. The print and the digital media can play a decisive role in such a situation. The data regarding the number of people getting the shots can be shared with the public.

Response from beneficiaries is lukewarm. It is mainly so because the misgivings about the efficacy and safety of vaccine still persist. Not much was ideally done to instill confidence about the same, even by experts and leaders by setting an example by taking the shots themselves, as was done in Delhi by the AIIMS director himself, to allay the fears about the safety.

The hesitation is due to fear because our prominent political leaders and bureaucrats have not taken the initiative to get vaccinated first. People must be encouraged by certain incentives.

It is sad that people have preferred to ignore the positive news regarding vaccine from across the globe. There is certainly some inertia in the human minds. Better to make it compulsory

Apprehensions among healthcare workers about the vaccine is giving a wrong impression to the public who are to be vaccinated next. The reason behind the low turnout is myths about the vaccine and the fear of side effects. To overcome hesitancy, the administration can take steps such as conducting webinars, putting billboards in public places, giving advertisements in newspapers and holding awareness campaigns, physical as well as through the social media.

It is mainly because of the trust deficit created by media coverage of the vaccine. It was reported that trials were not completed and there were some reactions after vaccination.

Vaccine hesitancy amid the Covid vaccination programme is not a new phenomenon as such hesitancies have existed in the past as well. There is a positive relationship between education and vaccine hesitancy. Educated people are less likely to be vaccine-hesitant. Governments, public health officials and advocacy groups must build vaccine literacy so that the public accepts immunisation soon.

The high incidence of hesitancy for the Covid vaccine is because of the varied apprehensions regarding the vaccine. The urgency in which vaccination was started questions its credibility. The new Covid-19 strains found lately also question its effectiveness. The rumoured side effects cause fear among public. Also, the fact that cases are on a sharp decline, questions its need. The authorities must sensitise people to the credibility, effectiveness, safety and the need for the vaccine.

The Covid vaccine hesitancy in Chandigarh is over 60 per cent. The main reason for such high indecisiveness is that these vaccines are new and people want to know how it works on others. The other aspect is that people are worried about the side effects in the wake of some cases reported across India.

We are not sure whether the vaccine will really take care of the most vulnerable sections of society such as elderly people and those with comorbidities. Another apprehension is regarding the quantum of side effects, as every person’s body reacts uniquely to any foreign chemical. The government has to come out with assurances on the safety and efficacy of these new vaccines.