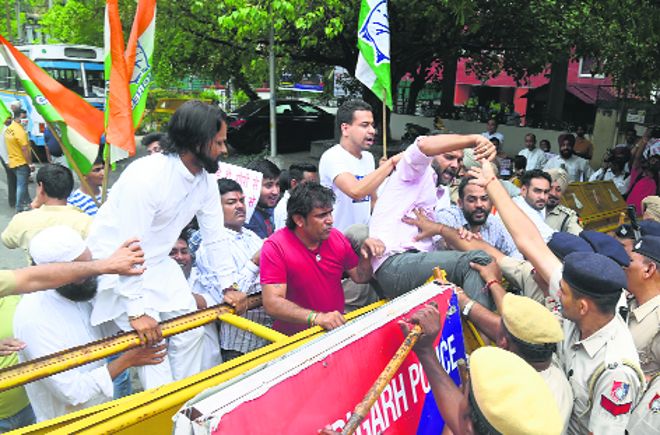 The city Congress today took out a protest march against the Modi Government over the “misuse” of Central agencies.

They began their march towards the Punjab Raj Bhavan from the Congress Bhawan, Sector 35-C, to present a memorandum addressed to the President of India.

The memorandum requested the President to advise the Modi Government to ensure that the “security agencies work impartially and do not try to falsely implicate leaders like Rahul Gandhi”.

The police stopped the workers, who were shouting slogans, at the Sector 34-35 traffic light point.

Congress workers, including senior party functionaries, were detained by the police when they tried to pass through the police barricades. They were taken to the Sector 36 police station in buses.

The Congress demanded a probe by an independent agency into the recent newspaper reports quoting a Sri Lankan functionary to the effect that Prime Minister Narendra Modi allegedly influenced the Sri Lankan President to award a wind power project to Adani group.

In the afternoon, Pawan Kumar Bansal, treasurer, All India Congress Committee, reached the police station to enquire about the detained Congressmen, who were released by the police later in the day.