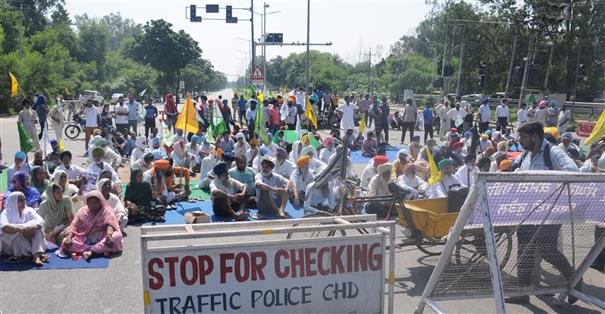 Farmers block the road near the Hallo Majra light point in Chandigarh on Monday. Manoj Mahajan

Commuters travelling to Chandigarh from neighbouring Zirakpur, Mohali and adjoining areas were inconvenienced as traffic was hit badly due to the Bharat Bandh called by the protesting farmers.

Blockades were put at the borders as the farmers laid a siege around the city, blocking the entry points at Hallo Majra light point, Sector 48-Jagatpura dividing road, Mullanpur barrier and on various roads leading to Chandigarh.

The road leading from Tribune Chowk to Zirakpur was also barricaded by the UT police and the traffic was diverted towards Kali Bari light point. Tractors were parked by the farmers at various points to stop the traffic.

Hemant a Zirakpur resident said there were blockades at various points following which he was forced to cancel his visit to the city.

Most of the roads wore a near-deserted look throughout the day. — TNS