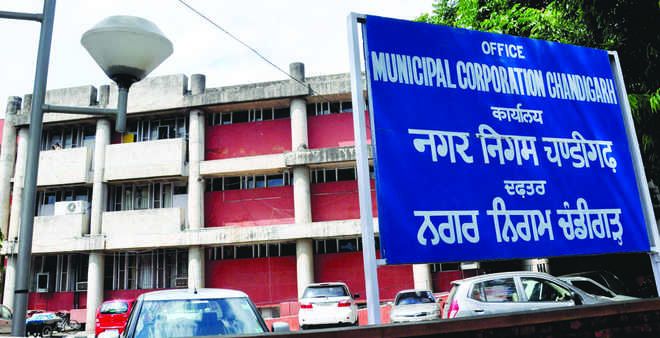 The standoff between the Municipal Corporation officials and the BJP leaders affected public dealing in the civic body's office for most of Wednesday.

The standoff between the Municipal Corporation officials and the BJP leaders affected public dealing in the civic body's office for most of Wednesday.

Public and staff entry was not allowed inside the office even as the MC employees went on a pen-down strike protesting against the BJP leaders and insisting on an apology from local BJP leader Gaurav Goyal for manhandling and abusing MC commissioner's secretary on Tuesday.

Heavy police presence kept an eye on the protesting employees near the main gate. A handful of AAP workers too protested against the unruly behaviour of BJP leaders in front of the office.

Around 2 pm, employees' unions' leaders moved to the Sector 17 police station and demanded that an FIR be registered against Goyal.

High drama was witnessed at the MC office on Tuesday when a group of state BJP leaders clashed with the staff members of the MC Commissioner’s office over a meeting with the civic body chief.

One of the members of the BJP delegation, Gorav Goyal, allegedly manhandled and abused the Commissioner’s secretary Jatin Saini when he asked them to wait for some time as the Commissioner was in a meeting.

In his complaint to the Sector 17 police station, SHO, Saini has written, “I was on duty and he obstructed me in my duty as well as manhandled me and used abusive language. He also threatened me of dire consequences and to remove me from service. It is requested to take appropriate legal action against Mr Goyal.”