Turnout down 8.7 per cent from 2017 Assembly poll | No untoward incident | Minor glitches in EVMs reported 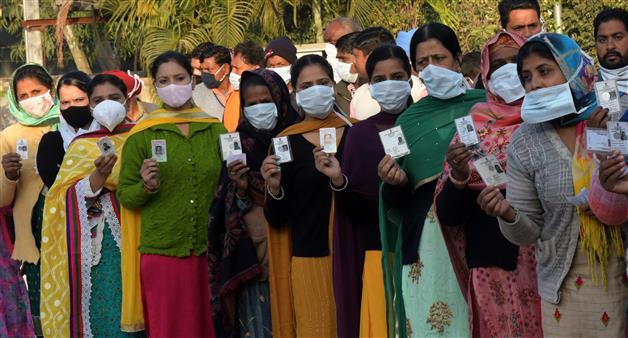 Women show their voter ID cards as they wait for their turn to cast their ballot at a polling booth in Zirakpur. TRIBUNE PHOTO: RAVI KUMAR

The district witnessed 63.1 per cent polling, which passed off peacefully in the three Assembly constituencies — Kharar, Mohali and Dera Bassi — here today.

The polling was 8.7 per cent less than the 2017 Assembly elections, which had seen 71.8 per cent voter turnout in the district.

In 2017, Mohali district had recorded 71.8 per cent voting. The voting percentage was less than the 2012 elections when it stood at 75.54 per cent. The Dera Bassi constituency had witnessed 76.06 per cent voting followed by Kharar with 72.93 per cent while Mohali had recorded 66.39 per cent polling in the previous Assembly poll.

In Mohali, people started visiting polling booths, both in urban and rural areas, when polling began at 8 am. Though there was no rush in the morning hours, with the passage of time, polling started picking up. In the first hour, the district had recorded just 2.18 per cent polling. The story was almost similar in the other two constituencies.

Polling picked up pace after noon with the Mohali Assembly constituency witnessing 22.85 per cent polling, while in Kharar and Dera Bassi, the turnout was nearly 30.5 per cent and 27.8 per cent, respectively.

At a polling station in a government school at Sohana village, people claimed that the polling process was slow as voting machines were not functioning. They said they had to wait for over an hour and a half to cast their ballot.

However, Election Observer K Mahesh said the polling process took time as a voter had to pass through various counters before casting the vote. Mohali District Electoral Officer-cum-Deputy Commissioner Isha Kalia said minor complaints such as EVMs not functioning were received in the morning and these were resolved within an hour. She said at some places, the beep was coming late and in some cases, the EVMs stopped functioning after polling of 50 to 60 votes while in some cases, the EVMs went blank. She said they had provided two additional voting machines in all polling stations for replacement in case of a technical snag. She said within one hour, the voting started normally. “The polling was peaceful and not even a single untoward incident was reported today,” she claimed.

After the completion of the election process, all EVMs and VVPATs, along with other polling material, have been sealed and kept in a strongroom set up at the District Sports Complex in Sector 78, Mohali. The strongroom, which will remain under strict vigil, was sealed in the presence of representatives and candidates of the polling parties. The counting of votes will take place on March 10.