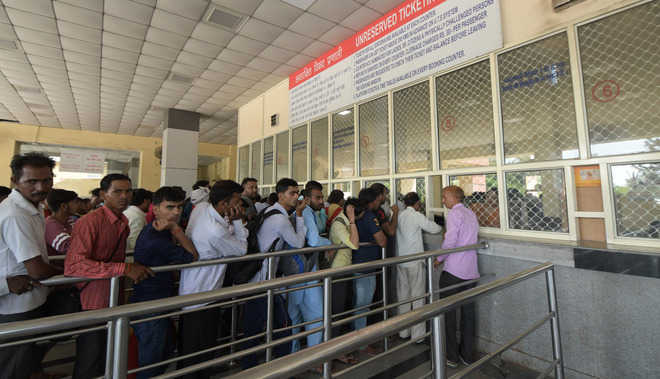 The ticket reservation counters at the city railway station remained shut today as eight of its 13 staff members tested positive for Covid-19. The counters, said Hari Mohan, Senior DCM, Ambala Division, Northern Railway, would resume operations on Monday as the area had to be sanitised for public safety.

“As an alternative, there are plenty of ticket reservation avenues across the city, including two counters at Sector 17, one at the Sector 43 bus stand, one at the PGI postal office and Suvidha Kendras, besides the online reservation system too,” said Mohan. He said, “Since the passenger reservation system is all about public dealing, it is important that the counters remain shut until the place is completely sanitised.”

Confirming the news, DRM GM Singh said, “Eight persons have tested positive.” Sources from the station said, “Three more staff members of the reservation office have high fever and their report will be out soon.”

The abrupt shutdown of the ticket reservation office on Friday caused inconvenience to many passengers, who had dropped in at the station for reserving rail tickets.

Talking to Chandigarh Tribune, Mahendra Kumar, who was in the city for his treatment at the PGI, said, “I had to leave for Jharkhand and came here for ticket reservation, but now I will have to go back all the way to Sector 17.”

Another passenger, Sahil Kumar, said, “I came here for a tatkaal ticket, but all reservation counters here are closed. We’ll stay back here in the city and book one on Saturday now.”