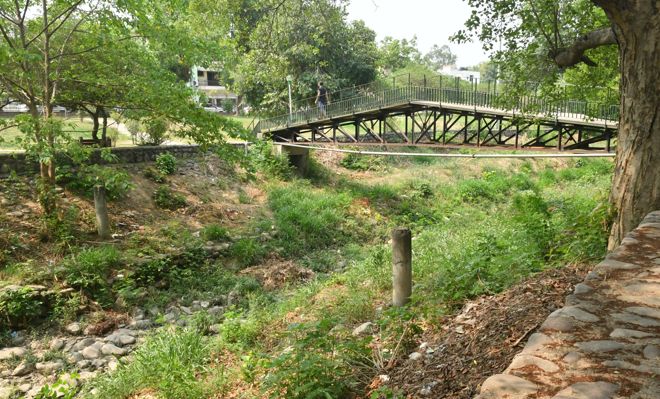 With heavy rain yesterday leaving the tailend of drainage pipes fully submerged in choes, thereby hampering the flow of water, the authorities have decided to get the courses cleaned.

Administration officials said they had regularly been cleaning up choes, but would again take stock to ensure free flow of rainwater.

Work on road gullies to be over by July 7

“We have already cleaned the choes and have been regularly doing so. We will get it done again,” claimed UT Administration’s Chief Enigneer OP Ojha. He, however, said the choes did not reach danger mark yesterday.

While, Likhmaram Budaniya, city-based environmentalist, commented: “Cleaning of choes will be of no use if sewage and other garbage continued to be dumped into these. As far as road gullies are concerned, after cleaning these, workers leave the waste or grass by the roadside and when it rains, it again blocks the system, causing waterlogging. Officers must carry out an inspection before releasing payment to contractors.”

We have already cleaned choes and have been doing so regularly. We will get it done again. —OP Ojha, UT Chief Enigneer

Besides, city’s storm water drainage system does not have enough capacity to handle high volume of rain. While, the city yesterday witnessed 68.2 mm rainfall in two hours, the drainage system has been designed to handle 15mm/hr rainfall in the northern sectors and 20mm/hr in the southern. All drains further discharge into N-Choe, Sukhna Choe and Patiala-ki-Rao. “Due to heavy rain yesterday, the choes ran full, submerging the tailend of drainage pipes. As a result, water started building up at the back end. That is why, water could not drain out,” MC Chief Engineer NP Sharma reasoned during the MC House meeting yesterday.

Season’s first monsoon rain poured misery on people as waterlogging and traffic jams were witnessed across the city. It further led to flooding of roads, roundabouts, parking lots and markets at several places.