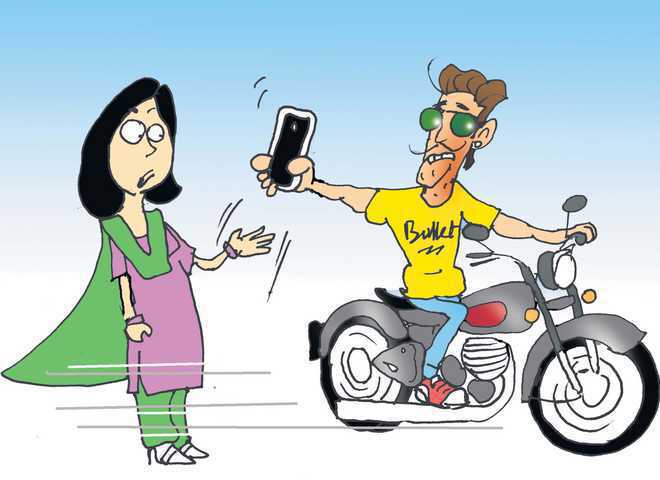 Chandigarh: Two snatchers, including a juvenile, who were fleeing after snatching a mobile phone, were nabbed by local residents at Mauli Jagran. Complainant Snehi Parshad of Vikas Nagar, Mauli Jagran, had reported that three unknown persons snatched a phone from his 12-year-old daughter in front of his house on July 27. While the miscreants were trying to flee, local residents two of them — a 16-year-old boy and Deepak (18), a resident of Ram Darbar, Phase I. TNS

Chandigarh: A 20-year-old motorcyclist was killed, while a girl riding pillion was injured after a rashly driven Audi car hit the bike near the Sector 3/4/9/10 chowk. It was a demo car, which was taken out for a test drive. According to the police, complainant Ankita (21) of Khuda Lahora, who was riding pillion on the motorcycle being ridden by her friend Arun Kohli, reported that they were coming from the Sector 4 petrol pump side when a speeding Audi coming from the Matka Chowk side hit their motorcycle. The injured Ankita and Arun were were rushed to the GMSH-16, from where Arun was referred to the PGI where he died. The police have registered a case against the car driver, identified as Ramji Pannu, a resident of Sector 15. He was arrested and later released on bail. TNS

Role of teachers as mentors

Two held for theft at house

Chandigarh: Two persons, identified as Saurav and Rohit, both residents of Ram Darbar, have been arrested in a case of house theft. The police said a woman resident of Ram Darbar had reported that gold and silver jewellery worth several lakhs were stolen from her house on July 25. A case was registered and later, the two suspects, who reside in the same area, were arrested for the crime. TNS

Zirakpur: The police have arrested four youths for rioting under the influence of alcohol. Zirakpur SHO Onkar Singh Brar said they received information that some youths were drinking alcohol openly on the bonnet of a jeep. The police arrested Avtar Singh, a resident of Mohali, Gurpreet Singh of Sangrur, Swapan Singh of Patran, and Sikandar Singh of Jind. TNS

Mohali: Goods worth lakhs were gutted in a fire at a footwear shop at the Phase 7 market here. The incident took place around 10:30 pm on Monday after the shop was closed. Nearby shopkeepers saw fumes emanating from the shop and informed its manager about the incident. A fire tender was rushed to the spot, which took around one hour to douse the fire. The police said the fire was probably caused by a short circuit. TNS

Mohali: Harbans Singh, 2016 batch PCS officer, joined as the Sub-Divisional Magistrate (SDM), Mohali, on Wednesday. Singh, who hails from Rupnagar district, was earlier the Kharar SDM. He was recently transferred to Mohali. He also served on various posts such as SDM, Garshankar, and SDM, Anandpur Sahib. Singh said his priority would be to implement government schemes and extend policies to beneficiaries in a transparent manner. TNS

Moga, K’thala to vie for title

Chandigarh: Moga will face Kapurthala in the final of the Punjab State Inter-District Senior T20 Tournament. The final will be held at IS Bindra PCA Stadium here on July 29. The semi-final between Moga and Amritsar was washed out due to rain on Wednesday. Moga qualified for the final on the basis of more wins in the league phase as per the PCA Inter-District Tournament Rules. TNS