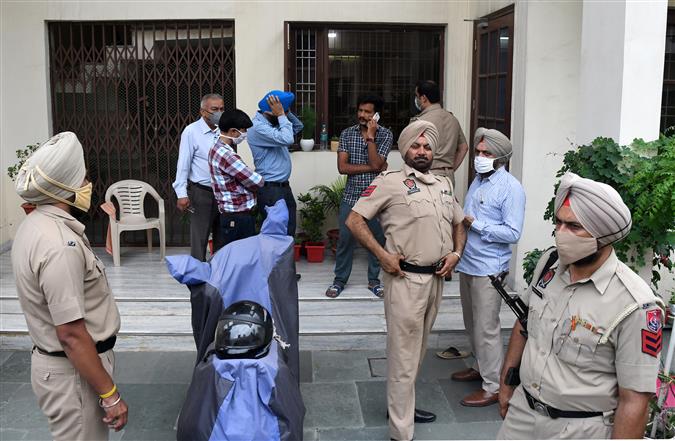 Police investigate the matter after a robbery at a house in Zirakpur on Thursday. Tribune photo: Nitin Mittal

In a broad daylight robbery, four unidentified persons looted cash and jewellery worth several lakhs from a house in Sharma Enclave at Lohgarh in Zirakpur on Thursday after keeping the family of an assistant manager in Mathooth Finance hostage.

According to information, four robbers arrived on two bikes at around 11.30 am and after keeping the family members and the maid hostage searched the house for about two and half hours and fled after looing cash, silver and gold jewellery from house.

Talking to media, Jaidev Goyal said he has retired from the post of DGM of Union Bank and is currently working as an Assistant Manager at Muthoot Finance in Sector 35, Chandigarh. He said at the time of the incident he was on his way to his office and his 60-year-old wife Naresh Rani, 40-year-old son Kapil Goyal and a maid were present in the house. One of the robbers first took the housemaid as hostage and Naresh Rani thought the suspect was the husband of the maid and took their fighting for a domestic quarrel her, he added.

Jaidev Goyal said after this the other three robbers entered the house one by one and disconnected the internet connection and tied up Jaideep Goyal’s son Kapil Goyal and put a sword around his neck.

He said the accused threatened Naresh Rani that if she does not hand over all the cash and gold in the house, her son will be killed. Jaidev Goyal said frightened over this his wife handed over the gold, silver and cash lying in the house. After his the robbers also tied her and searched the house for about two and a half hours and fled on their two bikes, he added.

SP Dr Ravjot Kaur Grewal said that manhunt has been launched to nab the accused with the help of the forensic team. She said investigations are under way.