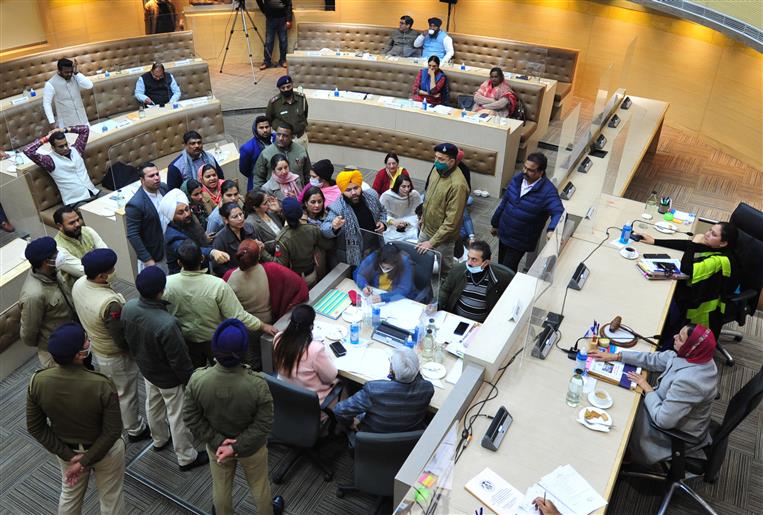 AAP and Congress councillors being taken outside the MC House by marshals during a general House meeting at the MC office in Chandigarh on Monday. Tribune Photos: Manoj Mahajan

Amid a ruckus and protests by Congress and AAP councillors, the first House meeting of the Municipal Corporation approved solid waste management-related agenda items. 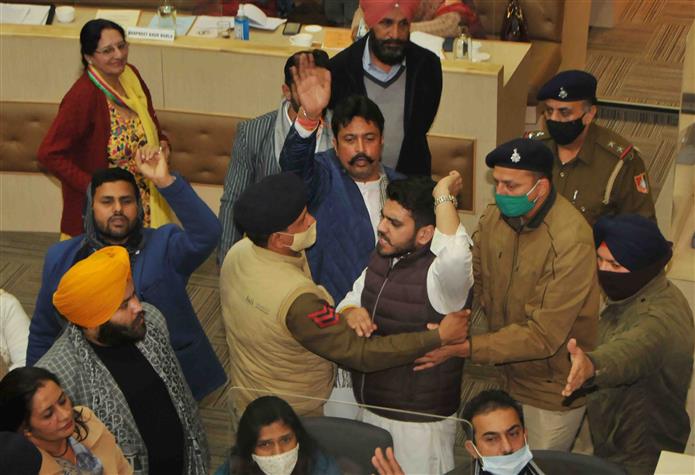 While the high drama by the councillors went on for nearly three hours, the agenda items were cleared in just five minutes.

Right from the start of the meeting, the Congress and AAP councillors created a ruckus against an agenda of approving the minutes of the last House meeting in which the mayoral elections were held. The Opposition councillors said they did not recognise BJP’s Sarabjit Kaur as the Mayor.

They were also demanding a vote on the agenda. Kaur told them that a case in this regard was pending in the Punjab and Haryana High Court and they should maintain the decorum of the House. However, the protest and shouts continued.

Raising slogans such as “Tanashahi, dhakeshahi nahin chalegi”, they sat in the well of the House and criticised the BJP. They alleged that the BJP and officials were hand in glove. BJP councillors countered them with “Bharat mata ki jai” slogans and asked them to let the “development agenda to be passed.”

After the councillors did not let the House function to discuss the agenda items, Senior Deputy Mayor Dalip Sharma, who was in the Mayor’s chair for over an hour in the absence of the Mayor, called marshals to remove them.

Some AAP and Congress councilors had to be physically removed from the House. It took much time to remove them as there were only a few marshals. After some of them were removed, they later sat on their seats following which the House could work. It was then decided that the agenda of the mayoral poll would be sent for legal opinion. The agenda of forming a few panels was deferred.

The BJP had won by a single vote in the January 8 poll after an AAP vote was declared invalid by the presiding officer. AAP challenged the election in the court.

No voting by AAP, Cong councillors

AAP and Congress councillors did not vote in the agenda items regarding repair of the existing solid waste processing plant and the bio-mining project at the Dadu Majra dumping ground.