Labourers lament lack of potable water, toilets; say they have to bathe in open 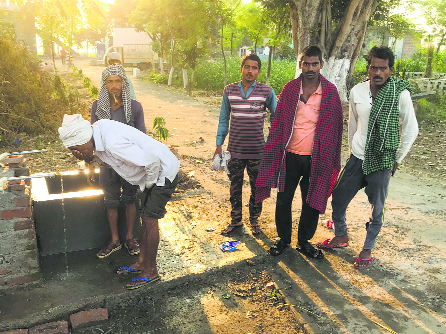 Amid the procurement of paddy, grain markets in the rural areas are deprived of basic facilities.

Hundreds of labourers working 24x7 at grain markets for lifting paddy are doing so without drinking water and toilets.

A visit to one of the rural grain markets — Daun Kalan, Seal, Bahadurgarh — by The Tribune laid bare the apathy of the government. Labourers are defecating in open because the permanent toilets at the market are lying defunct and the drains of the makeshift toilet are choked.

Besides, there is no arrangement for clean drinking water at the grain markets. Bhushan Kumar, a labourer at Duan Kalan grain market, said, “Every year, we face the same problems. In fact, in the absence of walled bathrooms, we have to take baths in the open.”

Labourers said the farmers spent only a few hours at the grain market and they were were the ones spending weeks at the site.

Ram Mohit of Uttar Pradesh said they were threatened of serious consequences by local farmers if they defecated in paddy fields. “Where should we go? Why can’t we have access to basic amenities? Are we animals?,” said Ram Mohit.

Meanwhile, Hari Singh, member, Jamhoori Kisan Sabha Punjab, said he had already written to the market committee, district administration and the Punjab Mandi Board in this regard. He said: “Despite repeated requests for basic facilities to labourers, nothing has been done so far. No one has even bothered to visit the rural markets.”