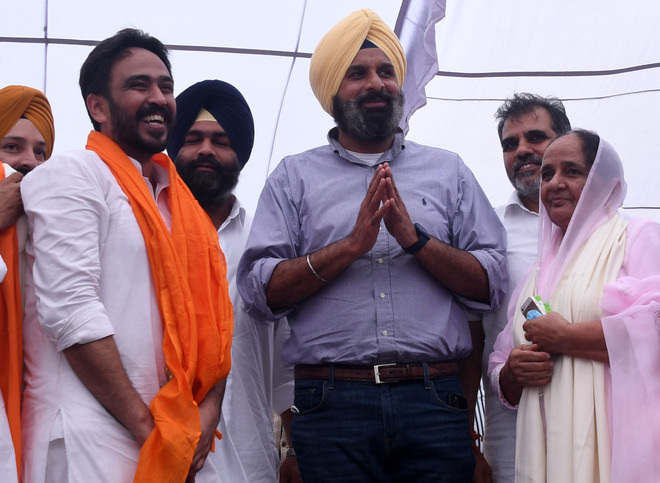 SAD leader Bikram Singh Majithia and others during an event in Phase 10, Mohali, on Monday. Tribune photo: Vicky

The Shiromani Akali Dal (SAD) will not field its candidate from the Mohali Assembly segment in the coming elections in the state, said SAD leader Bikram Singh Majithia.

He said the SAD would instead support the candidate of its alliance partner, the Bahujan Samaj Party.

He was here to attend a function organised to welcome back councillor Nirmal Kaur and former SOI leader Simran Dhillon into the party. He assured “due respect and recognition” to the Dhillon family and said their return to the SAD would strengthen the party.

Commenting on the local Municipal Corporation elections held in February this year, Majithia said senior leaders as well as local leaders would have to introspect on the causes of the debacle. He said possibly, the choice of candidates was not appropriate. He said if they did not accept their mistakes, the party could not progress.

Dera Bassi MLA NK Sharma lashed out at Health Minister Balbir Singh Sidhu for allegedly grabbing shamlat land and added that drugs purchased by the government had been sold to private hospitals or chemists. He said the Centre had provided 80 ventilators and of these, 40 were allotted to private hospitals while the remaining were lying unused.