Both students of Chandigarh schools; no merit list this year due to Covid

Two Chandigarh students topped the tricity by securing 99.8 per cent marks in the CBSE Class X examinations. The results were announced today. Due to the Covid-19 pandemic, the board did not announce a national merit list this year.

As no criteria has been laid by the board for deciding the merit list, the two students have been tagged as toppers on the basis of the marks scored in the main five subjects, as given in the CBSE marksheet.

Sanyam Agrawal of Sri Guru Gobind Singh Collegiate Public School, Sector 26, secured 100 marks in four subjects – English, mathematics, science and social science. His marks in the main five subjects are 499 out of 500, which translates to 99.8 per cent. He has scored 100 per cent in the best-of-five subjects, which included 100 marks in information technology, an additional subject.

He also has a YouTube channel, Learn with Sanyam, having 8,000 subscribers. He started the channel during the lockdown to provide free education to students in various subjects. From video lessons on ‘Differentiation in chemistry’ to lessons on how to overcome problems in life, he has shot over 100 video lessons during the pandemic.

The son of Rakesh Agrawal, who is the Commissioner of Police, Ludhiana, he has taught many unprivileged students from Class VIII. Sanyam has been associated with NGOs that offer help to the needy. He draws inspiration from his father and has his own way of serving the community. Sharing his examination strategy, he said he used to make his own notes from NCERT books. “I believe in visualising concepts, instead of cramming. I used to study for seven-eight hours a day. I used to finish most of my study during the day and take breaks in the evening to do other activities,” he said.

He learnt various computer languages like HTML or Java and aims at getting admission to computer science engineering in top IITs. At the age of five, he also participated in a national chess tournament. Vanshika Bhardwaj of KBDAV School, Sector 7, too, scored 100 marks in English, mathematics, science and social science. She did not opt for additional subjects. Her success strategy is constant revision and regular study of five-six hours a day. While preparing for the exams, she solely depended on NCERT books.

She drew inspiration from her paternal uncle, who is a doctor, and wants to follow in his footsteps. “I always ensure that the syllabus is completed two-three times and the time before the exams is spent only on revision,” she said.

Vanshika is currently pursuing a medical stream. Her mother Archana Bhardwaj is the sole breadwinner of the family. She had also donated one kidney to her husband, who is bedridden. 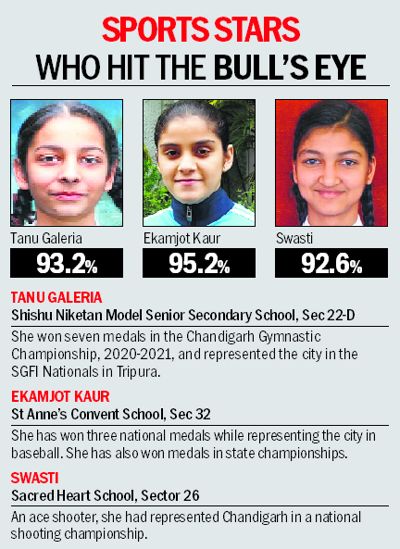 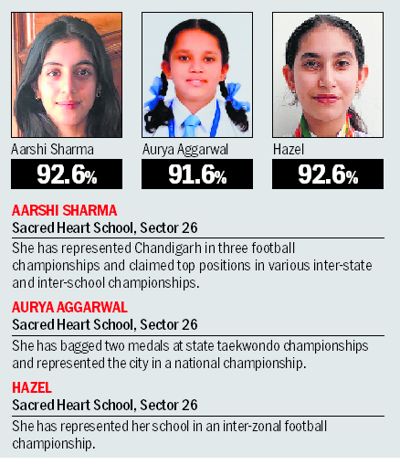