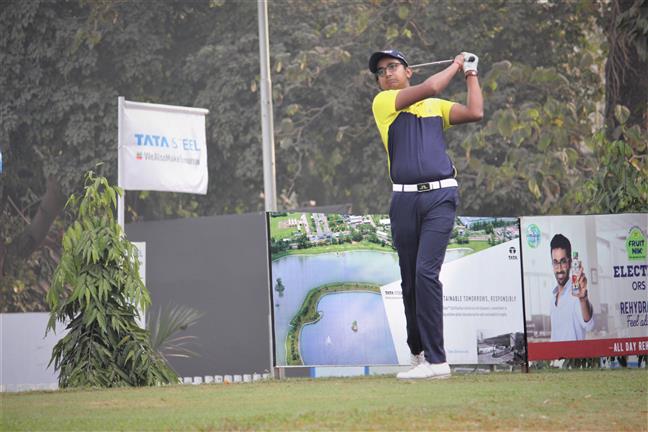 Shaurya Sharma in action during the Pre-Qualifying II event at the Golmuri Golf Course, Jamshedpur.

Chandigarh-based amateur Shaurya Sharma has won the Pre Qualifying II event with an impressive five-shot margin at a total of 10-under 134, at the TATA Steel PGTI Qualifying School 2023 played at the Golmuri Golf Course, Jamshedpur.

From a total field of 105 in Pre Qualifying II, the top 23 players qualified for the final qualifying stage as the cut was declared at 2-over 146. 22-year-old Sharma (66-68), the overnight leader by one shot, built on his first round effort with a 4-under 68 in round two that featured six birdies and two bogeys. Sharma, currently placed 21st in the rankings on the Indian amateur circuit, was exceptional with his irons and wedges, making 17 greens in regulation for the second day running.

His top-notch approach shots set up four tap-in birdies for him where he landed it within one foot. He also drove the par-4 12th green for the second straight day to walk away with a two-putt for birdie there. “I was very accurate with my hitting today and that helped me achieve my target of a double-digit total. Ending up with a 10-under total and a big margin over the others gives me loads of confidence going into the Final Qualifying Stage,” said Sharma. He added, “I would like to thank my coach Akshay Sharma for all his guidance and advice as well as Yuvraj Singh Sandhu and Karandeep Kochhar for all their encouragement and motivation.”

Meanwhile, Kartik Digvijay Singh (72-67) of Panchkula fired the day’s best score of 67 to finish second at 5-under 139. His error-free round featured an eagle and three birdies. Bengaluru’s Gagan Vinod took third place at 3-under 14.