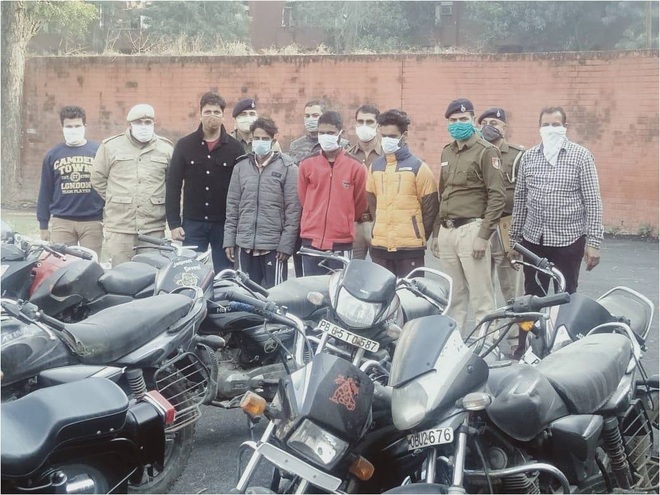 The suspects in the custody of the UT police.

The UT police nabbed six vehicle thieves and recovered 40 two-wheelers from their possession.

Among the 40 two-wheelers recovered, 36 are motorcycles, including 10 Bullet bikes, while four are Activa scooters. The police said the suspects used to sell the stolen two-wheelers to gullible people in villages of Mohali and Fatehgarh Sahib at cheaper rates.

Among the 40 two-wheelers, 36 are motorcycles, including 10 Bullet bikes, while four are Activa scooters.

The police said on November 29, they had received information that a gang of vehicle thieves would be visiting Sector 40, following which the police reached the spot and nabbed four youths, including Lovepreet, Hardeep, Ravinder and Sharanjit, who arrived there on stolen two-wheelers.

Similarly, on November 30, another vehicle thief, Kavi, was nabbed with a motorcycle, which was stolen from Sector 41. The police said the sixth suspect, Baljinder Singh, was arrested on December 1 from Sector 40 while riding a stolen Activa scooter with a fake number.

The police said among the six suspects, three — Kavi, Baljinder and Sharanjit — had a tainted past. They were arrested by a team of the Sector 39 police station in January this year for vehicle thefts.

The police said the suspects used to sell the stolen two-wheelers to gullible people in villages of Mohali and Fatehgarh Sahib at cheaper rates.

They used to promise the buyers that they would provide the NOC later and would receive the remaining amount at the time of handing over the NOC.

One of the suspects, Kavi, an auto driver, was a police informer in Punjab. He used to provide information of drug peddlers and bootleggers. Later, he started stealing two-wheelers.