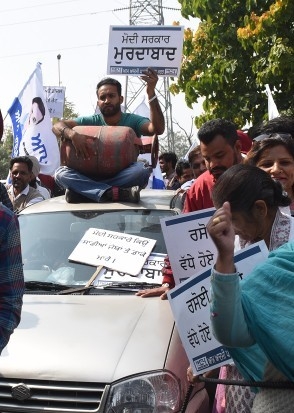 The Aam Aadmi Party (AAP) today staged a protest against the Centre and the state government over the rising prices of fuel.

Addressing the media, district AAP president Parminder Goldy said the pandemic had devastated people’s businesses around the world. He said while people were already suffering financially, the state government was imposing additional taxes on petrol and diesel to fill its coffers.

Goldy said the state government was looting people by imposing taxes on fuel instead of supporting them.

The AAP leader said the increasing fuel prices would not only affect the common man but also the already burdened farmers. “Rising fuel prices will also impact the prices of daily necessities, which will further hit the poor. The Chief Minister of Punjab seems to be least bothered with the masses,” he added.

District AAP secretary Parbhjot Kaur said Capt Amarinder Singh was not acting as the Congress or people’s Chief Minister, but the CM of the BJP under collusion with the Modi government.