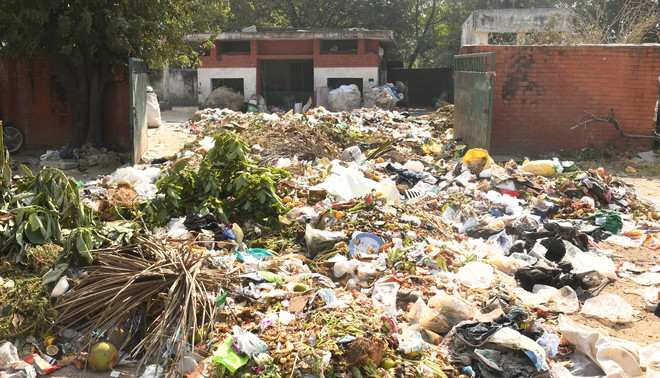 Heaps of garbage at the entrance to the Sehaj Safai Kendra in Sector 21, Chandigarh, on Sunday. Tribune Photo: Pradeep Tewari

The ongoing strike by the door-to-door garbage collectors and sanitation workers has left some of the city’s Sehaj Safai Kendras (SSKs) and public areas full of garbage.

Residents said protesters were not allowing them to throw garbage in SSKs. The waste is lifted from the kendras in MC vehicles and transported to the waste processing plant. Garbage was also found strewn in parking lots, cycle tracks and open areas in Sector 18, 19, 20, 21, 22 37 and other places.

“The MC failed to resolve the crises. We got many complaints from different RWAs about the waste not being collected from houses. People have started dumping garbage in nearby areas,” lamented Hitesh Puri, chairman, Chandigarh Residents Association Welfare Federation (CRAWFED).

Safai Karamchari Union president Krishan Chadha, said, “Till our demand of stopping the practice of making us wear smart watches is accepted, we will continue the work strike.”

OP Saini, chairman, Door-To-Door Garbage Collectors Society, added, “We had asked the MC Commissioner if he agreed to our demands, he should come to the protest site and declare it before the protesters.”

In a letter to Mayor Raj Bala Malik, Congress councillor Satish Kainth stated, “Cleanliness of markets, roads and streets is affected. An urgent physical House meeting should be called.”

Sources said a meeting was likely to be held between the MC Commissioner and the protesters on Monday. Councillor Rajesh Kalia may broker a deal between them.