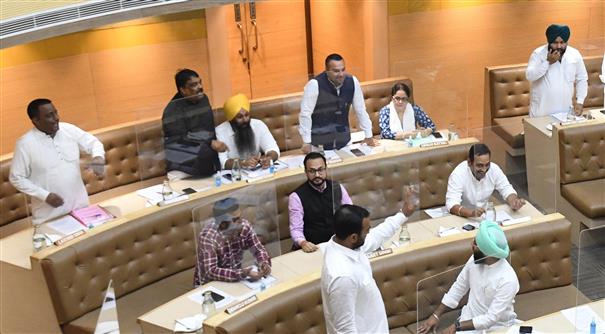 BJP & AAP councillors in a heated argument during an MC House meet. File

Taking a U-turn, nine AAP councillors today gave their consent to the Municipal Corporation’s revised study tour of Indore and Nagpur. Punjab Governor and UT Administrator Banwarilal Purohit had two days ago given assent to the study tour after the administration rejected the MC’s proposal for a tour of Goa and Mumbai.

Protesting against the Goa study tour, the AAP councillors had voted against the agenda item in the MC House during its previous meeting.

Had opposed move in House

Eleven councillors of the ruling BJP, two of the Congress and the lone SAD councillor had given their consent for the visit.

AAP’s Chandigarh co-in-charge Pradeep Chhabra said: “Our party has approved the study tour for our councillors as cities have been changed from Goa and Mumbai to Indore and Nagpur, where there is a lot to learn for our newly elected representatives.”

We were not against study tours. Our objection was to cities such as Goa and Mumbai. Indore is the number one city in Swachh Survekshan. — Yogesh Dhingra, AAP’s Leader of Opposition

The AAP stands exposed. During the House meeting, they took moral high ground in a bid to score brownie points. Now, they have shown their true colours. — HS Lucky, Congress president

“Key city projects, including Sector 41 AC fish market, open-air gyms, two lone concrete roads in Sectors 32 and 39, special park for blind students, LPG crematorium and slaughter house, are the outcome of study tours in the past,” he said.

AAP’s Leader of Opposition Yogesh Dhingra said: “Our nine councillors today gave their consent. We were not against study tours. Our objection was to cities such as Goa and Mumbai. Indore is the number one city in Swachh Survekshan and should be visited to learn and adopt good practices there.”

The ruling BJP and other parties, however, slammed the AAP move, calling it an eyewash. “The AAP says one thing and does the opposite. They had been questioning the need for study tours, saying the money should instead be utilised on development works. They had called it ‘criminal waste’ of public money. Now, they are saying they were opposed to certain cities, not the study tour. Their statements are on record in House,” said BJP councillor Saurabh Joshi.

Congress president HS Lucky said: “The AAP stands exposed. During the House meeting, they took the moral high ground in a bid to score brownie points. Now, they have shown their true colours.”

The MC House had approved the study tour of waste processing plants in North Goa and Mumbai for its councillors on August 23, but the AAP councillors had voting against the move.

Amid sharp criticism from public, the UT Administration denied approval to the tentative tour schedule i.e. from September 9 to 15.

Purohit later cleared a visit by councillors to Indore and Nagpur, while exhorting “the councillors to visit progressive cities to get maximum exposure and ensure the City Beautiful benefited from their learnings”.