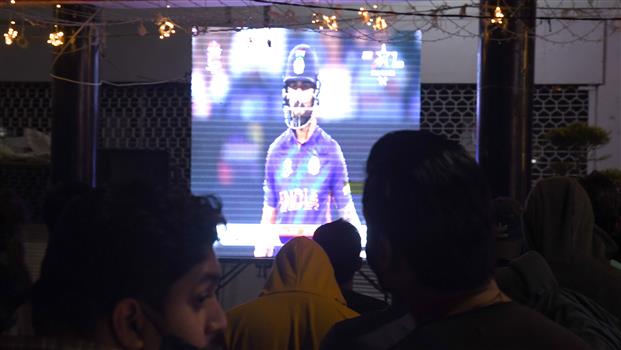 People watch the India-Pak T20 tie on a big screen in Chandigarh.

An unbeaten 152-run partnership between Pakistani openers Mohammed Rizwan (78) and Babar Azam (66) sank the hopes of local cricket buffs. The match was a tense affair for local cricket lovers, who remained glued to television screens to see the desired result. “It was a close match. Losing two wickets in the first three overs was really disheartening. However, Virat Kohli’s innings later gave us some hope. Given the recent performance of our players, the Indian team was expected to perform well,” said Ashwani Goyal, a city resident.

“Contrary to expectations, Pakistan bowlers really performed well. This wasn’t a one-sided affair and both sides proved that cricket is a really exciting game. I would love to see both sides play often,” said Arjan Singh, a local cricket expert. “There’s always only one winner, and this time, it was Pakistan’s day,” said Atul Sharma, another local resident.

City hotels also witnessed a huge rush of cricket buffs coming to enjoy the match. “We usually witness huge rush on Sundays, but today we had advance bookings. This is not usual and people enjoyed the match. However, the match result was disheartening,” said Paras, manager of a local hotel. “It was a poor performance by the entire Indian team. Both batsmen and bowlers struggled hard, and finally lost the match. This match was certainly important and India should have won it, but the tournament has just started. The squad needs to take lessons from here, forget the past and aim to win ahead,” said Priyank. Anwar, a cricket expert, added, “The team formation should be blamed for the loss today. If Hardik Pandya was not to bowl, why was he included in the team. Either Shardul Thakur or Ishan Kishan should have been included in the squad.”

Meanwhile, despite rain, big screens were installed at various parts of the city. People enjoyed the match in huge gatherings.