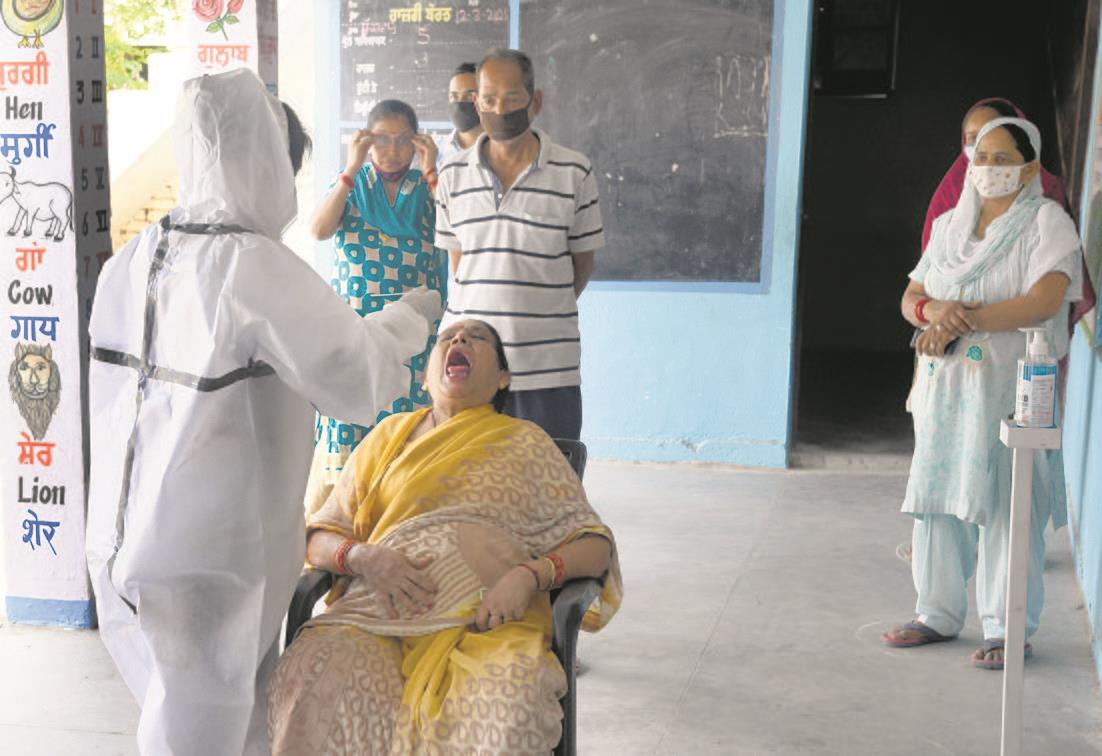 A health worker takes a sample for the Covid test in Dhakoli on Thursday. TRIBUNE PHOTO: NITIN MITTAL

Fifty-eight contacts of Covid positive cases have been found to have contracted the virus in Dhakoli. Health teams took a total of 2,000 samples of contacts of positive cases during the past two days. Dhakoli has been turned into a containment zone after a large number of cases were being reported from the area.

The district administration has now opened the K-Area and areas of Dhakoli before the railway crossing after completing the sampling process.

Mohali: Since the outbreak of the pandemic, the district witnessed its highest-ever single-day case spike with 860 cases surfacing in the past 24 hours. A total of 472 patients were cured, while one more death was reported. Among the the fresh cases, 399 were reported from Mohali (urban), four from Banur, 11 each from Lalru, Boothgarh and Kurali, 34 from Gharuan, 47 from Dera Bassi, 147 from Kharar and 196 from Dhakoli. A total of 33,844 cases have been reported from the district so far. TNS

Divulging details, Deputy Commissioner Girish Dayalan said the Dhakoli area had been divided into 10 zones and teams were taking samples of the contacts of the Covid positive cases.

Dayalan said the 10 teams deployed in the area were presently taking samples at five different locations, including Gulmohar area, Dhakoli, Sushma societies in Peer Muchalla, Mamta Enclave and Spandle Society. He said they were thankful to the people of the locality, who have been cooperating in sampling and vaccination. “We are opening areas after completing the sampling work,” he added.

Meanwhile, more than one lakh eligible persons have been vaccinated against Covid-19 in the district so far.

Civil Surgeon Dr Adarshpal Kaur said till April 15, a total of 1,03,347 beneficiaries, including 37,557 senior citizens, had been given doses in the district. A total of 3,413 beneficiaries were given the jab on Thursday.

Praising the entire health care staff for the achievement, she said doctors, nurses and paramedical staff were risking their lives to save the lives of people.