The ugly side of the City Beautiful : The Tribune India

The ugly side of the City Beautiful 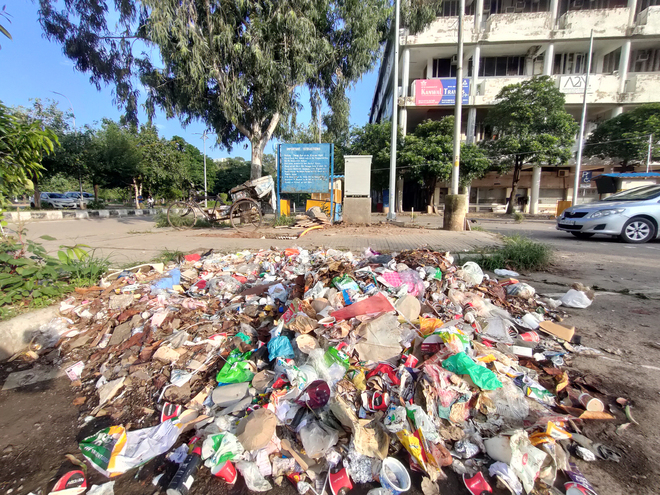 A heap of garbage in a parking area of Sector 17, Chandigarh, on Sunday. Tribune photos: Pradeep Tewari

Chandigarh may be working on several Smart City projects worth crores, the civic condition of the heart of the city — Sector 17 — shows a sorry state of affairs here.

I will ask the SDO and the JE concerned to visit the area on Monday and submit a report. Action will be taken accordingly. — Ravi Kant Sharma, Mayor

Broken tiles, twisted railings, heaps of garbage, encroached corridors, wild growth and items stored by labourers in corridors, particularly near Bank Square and the DC office area, welcome visitors. The condition of the sector has gone from bad to worse over the years.

“I have been working in Sector 17 for the past 27 years, but have not seen the area in such a pathetic state. I think ever since the two-bin vehicles were introduced, the problem of garbage dump in different areas near Bank Square, Sector 17-B, has increased. Also, people sleep here and keep their stuff dumped even during the day. Maintenance is a big issue in the sector,” lamented a bank employee preferring anonymity.

Neeraj Bajaj, president, Business Promotion Council, Sector 17, said, “Cleanliness and maintenance are big issues here. Though in the market area, we keep thing intact but nobody pays attention to the areas near Bank Square.”

Mahesh Kumar, an employee of a private company in Sector 17, said, “I have been coming to this sector since my college days, but have not seen it in such a bad condition before. On the one hand, we boast of Chandigarh being a smart city, while on the other hand we fail to maintain even the city’s centre.”

Interestingly, the offices of Chandigarh Smart City Limited and the MOH, Municipal Corporation, are situated in Sector 17.

Area councillor and Mayor Ravi Kant Sharma said, “We have resolved the issues at the places from where we had received complaints. I will ask the SDO and the JE concerned to visit the area tomorrow and submit a report. Action will be taken accordingly.”