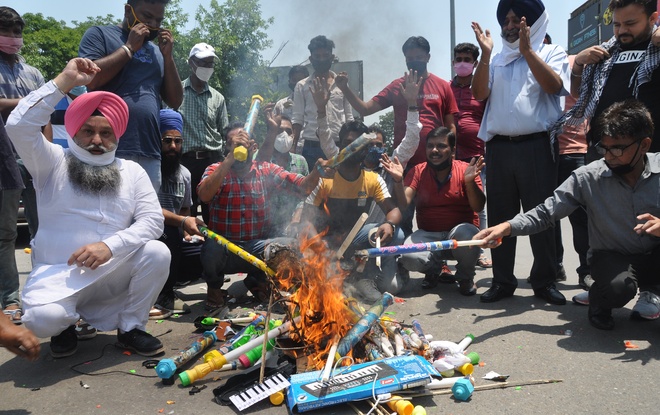 Members of the Mohali Beopar Mandal hold a protest against the killing of Indian soldiers in the Galwan valley of Ladakh, at Phase 7 in Mohali on Wednesday. Tribune photo: Vicky

Members of the Chandigarh Traders’ Association, Sector 17, have decided to boycott products made in China.

The association president, Kamaljit Singh Panchhi, said they had called a meeting to discuss the present relationship between India and China who recently attacked on Indian Army and 20 soldiers sacrificed their lives.

“Our duty is to stand by our nation and security forces who sacrifice their lives to safeguard our country. The least we can do is to make them feel that the ones they are fighting for are standing with them,” he said.

In the meeting, it was decided that every citizen should start boycotting Chinese products and use Indian merchandises that were best and affordable, he said.

The members said they would not purchase imported goods and specially boycott the Chinese items and would buy only Indian-manufactured goods. The traders even pledged to boycott Chinese items.

Panchhi appealed to all trader associations and resident welfare associations to come forward and encourage their members buy Indian goods rather than Chinese items.

He said they would also make the public aware about boycotting the Chinese products.

Chandigarh: The National Federation of Defence Honorary Commissioned Officers said it was very unfortunate that the Chinese Army was not implementing the agreement reached between local commanders to withdraw their troops during their meeting held last week, which resulted in physical clash between the two sides at Galwan Valley.

Chandigarh: All Churches Council has strongly condemned the killing of brave Army Colonel and 19 soldiers who were killed by the Chinese army in a cowardly act in the Galwan valley of Ladakh border area on Monday night.

The council president, Anil Masih, said they all martyred in line of duty and made supreme sacrifice for our country. “The nation always stands with martyrs and with their families who don’t forget their duties in any circumstances. They are the real heroes of our country,” he said and added that their sacrifice should not be forgotten.