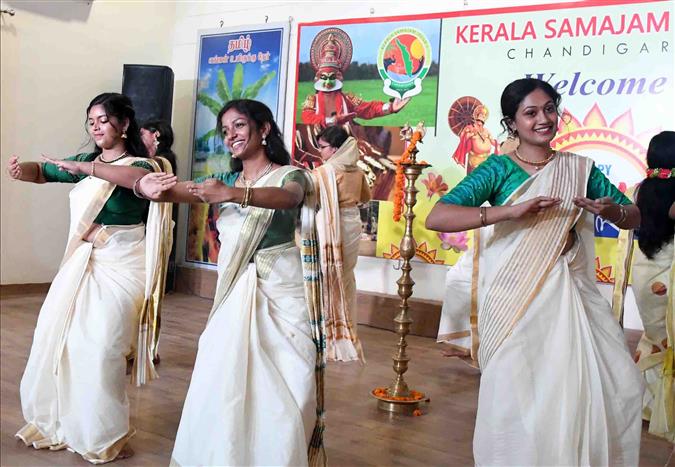 Malayalees residing in and around Chandigarh along with non-Keralites celebrated Onam with zeal.

Punjab Governor and UT Administrator Banwarilal Purohit gave Onam greetings to the people of the southern state and Malayalees across the world at an event organised by Kerala Community at Bharathi Bhawan, Tamil Manram Building, Sector 30, here.

Addressing the gathering, the UT Administrator said: “Chandigarh offers a vibrant and cosmopolitan culture where people from diverse walks of life engage and mingle with each other. Chandigarh is indeed a mini-India where people from different states and cultures live in harmony. All communities, including Malayalees, have contributed immensely to the progress of this City Beautiful”.

Purohit assured the Kerala Samaj that he would look into their request for the allotment of land for the construction of Kerala Samaj as soon as the stay is vacated by the Supreme Court for allotting the land to various societies.

Chendamelam, which is one of the most popular among Kerala’s instrumental music forms, was the main attraction. Pulikkali, a Tiger’s play, is a recreational folk art from Kerala and is performed by trained artistes painted like tigers and hunters in bright yellow, red and black. They dance to the beats of instruments such as “Udukku” and “Thakil”. The performance revolves around the theme of tiger hunting.

According to a popular legend, the festival is celebrated to welcome King Mahabali. It is believed that King Mahabali will come to Kerala on this day to meet his subjects and the people of Kerala make elaborate preparations to welcome their King in the best possible manner.