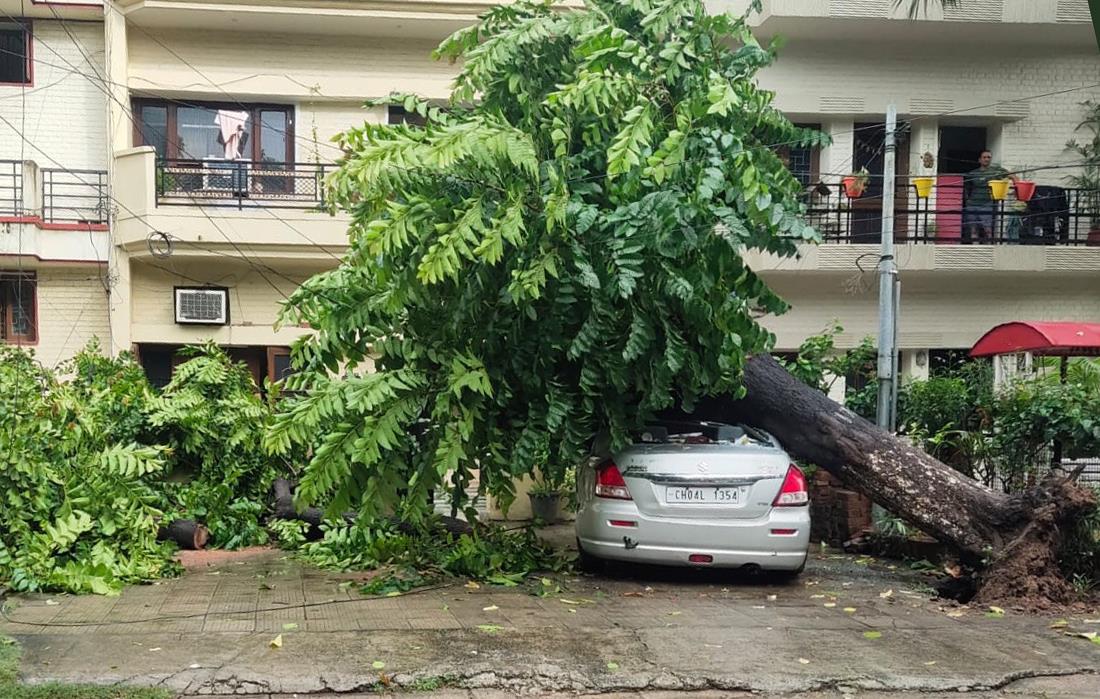 A car damaged by a tree in Sector 23C. Pradeep Tewari

Record 24-hour September rainfall in 12 years created havoc in the city, causing road cave-ins, uprooting of as many as 37 trees and affecting power supply in several areas.

The overnight rain forced the UT Administration to open a floodgate of Sukhna Lake for the fourth time this monsoon season.

The gate was opened at 4.30 pm as a precautionary measure after the water level hit the danger mark of 1,163 feet.

Cave-ins were reported on several roads in Sectors 33, 45 and near Sukhna Lake. A portion between a cycle track and main road caved in at Sector 45, while a similar collapse was witnessed right across the road in Sector 33, around a cycle docking station. Part of the jogging track in Sukhna Lake also caved in.

A large number of trees got uprooted, including one in Sector 23, where a car parked outside a house got damaged. Another tree fell on the road separating Sectors 37 and 38, causing a traffic jam for a while.

Several parts of the city witnessed waterlogging, leading to inconvenience to commuters. Many got stuck in traffic jams. Minor accidents due to clogged roads were also reported.

Power supply was suspended in the morning in several parts of the city and could be restored only by afternoon. The southern sectors were the most affected, witnessing five to six hours of outage.

The UT also witnessed one of the coldest days of the season, with the maximum temperature dipping to 25.9 °C, seven degrees below normal. While city’s night temperature was 22.4 °C, which is two degrees above normal.