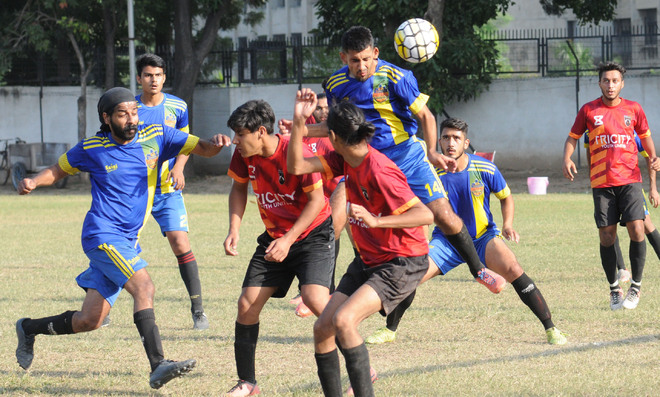 Players vie for the ball during a football championship at the Police Lines in Sector 26, Chandigarh, on Wednesday. Manoj Mahajan

Harman scored the lone consoling goal of the match in the 87th minute. In the second match, Saibaba FC defeated Stephen’s FC via tie-breaker. Earlier in the stipulated time, the match ended in a 1-1 draw. Navjot (108th) netted the first goal to put Saibaba FC in lead, while Shivam levelled the score in the 118th minute for Stephen’s FC.

Meanwhile, contrary to the AIFF rules, Saibaba FC lads were made to play their second match of the day which they lost to Liberty FC (0-4). Navdeep (16th), Gurtejwar (18th), Krishna (28th) and Ankit (52nd) scored one goal each. In their second match, Tricity FC defeated Rajeshwar FC in a tie-breaker.

As per the AIFF rules, teams should be given ample layover before playing their second match. The matches are in the 45-15-45 (90 minutes and 15 minutes rest) format.