Protesters from Punjab, Haryana to be stopped at their respective borders with UT 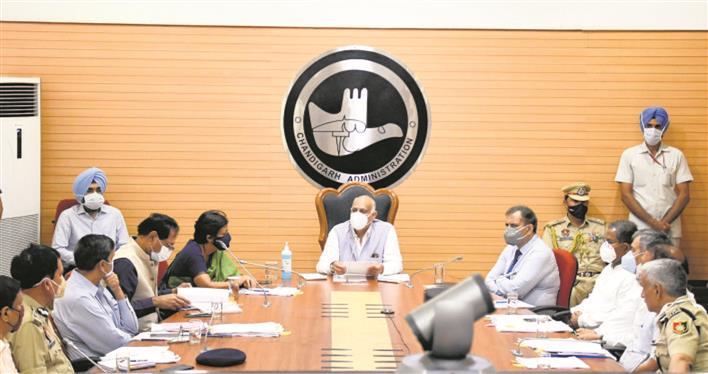 UT Administrator VP Singh Badnore presides over a meeting of the Apex Committee of Tricity in Chandigarh on Wednesday.

Suggestions for uniform excise duty, motor vehicle taxes and fuel prices in Chandigarh, Mohali and Panchkula came up at the third meeting of the Apex Committee of Tricity.

The Administrator said the main objective of the meeting was to work towards coordinated development of the city and its satellite towns in Punjab and Haryana.

The committee discussed various law and order issues. They dwelled on participation of both neighbouring states in tackling crime committed by interstate gangs, snatchings and thefts in the tricity. It was also suggested to encourage the use of emergency response support system (Control Room No. 112).

Citing an example of recent protests in the city, the Administrator issued directions to ensure compliance of the decision to prohibit the entry of tractors in the tricity during such agitations. It was also agreed that protesters from Punjab and Haryana need to be stopped at the respective borders with Chandigarh, with support of the respective state government. Peaceful agitations with prior permission need to be allowed to be held, but only at dedicated and earmarked areas in the UT.

The Administrator exhorted that all levels of official hierarchies, right up to the beat level, should hold meetings at regular intervals and follow-up action should be taken accordingly.

The Administrator emphasised that all three governments need to work in coordination to work out on a direct approach road for connectivity with the Chandigarh international airport as well as the ring roads around the tricity.

In the meeting, it was also discussed to harmonise the excise duty, motor vehicle taxes and fuel prices in the tricity.

The issue of beggary was also highlighted wherein it was decided that proper schooling should be provided to child beggars.