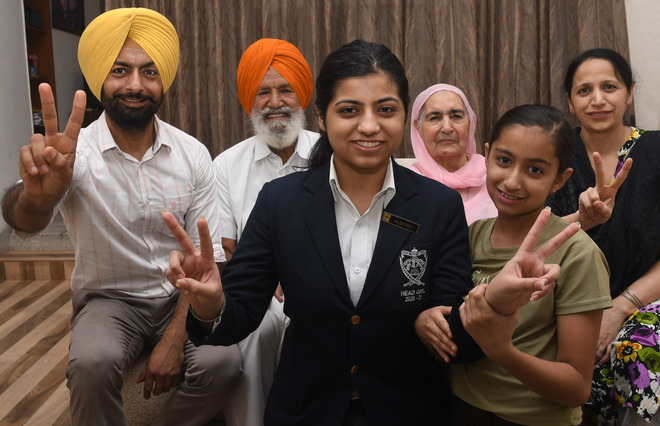 The joint family of Khushi and Himanshi, both 17-year-old and hailing from Barnala, was joyous as they came to know that they have emerged the toppers in the tricity.

The Covid-19 pandemic did not deter Khushi’s spirits as she chose to travel three hours just to appear for an offline pre-board tests.

“I used to leave home at 6 am and reach the school by 9 am to give offline exams. Although the option was available in online mode also, I wanted to test my preparations for the final board examinations. The pandemic did play havoc with the whole academic year. Nevertheless, I ensured that I revised everything taught in the class on that very day,” said Khushi. Khushi said it was difficult for her to cope with the CISCE syllabus as she did her Class X from the CBSE board.

Himanshi, on the contrary, appeared for her pre-boards online but had started preparing in Class XI only by spending a few hours extra. “Covid didn’t affect my preparations but it did demotivate me because there was a lot of uncertainty related to exams.” She added that she took class tests and assignments very seriously even if those were provided in online mode. The sisters aspire to join Delhi University and pursue BCom (Hons). Noorbir Kaur Grewal also topped the tricity by securing 99.75 per cent in the humanities stream. She is a student of Yadavindra Public School (YPS), Mohali. She said she studied for five to six hours a day and wanted to pursue a law course and become a Judge. Another student of YPS, Ranmeekjot Kaur, secured the second position in the tricity and topped the medical stream by securing 99.25 per cent marks. She wants to pursue MBBS and later go for the Indian Administrative Service by clearing the UPSC exam. Sejal Trehan, also a student of YPS, scored 97.75 per cent to top the non-medical stream and stood third in tricity. Sejal said she paid attention to classes and studied on weekends or holidays. She wants to pursue arts and become an IAS officer.