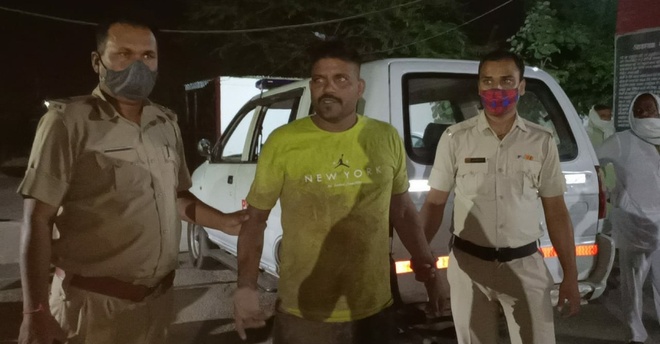 One of the suspects in police custody in Panchkula.

Two policemen, including an ASI, were allegedly beaten up and their uniform torn by two men in an inebriated state at the Sector 25 market this evening. One of the suspects, identified as Sanju, was arrested. The second suspect remains at large and his identity is unknown. The incident took place around 7.30 pm.

“After receiving a distress call from a salon owner that the suspects had entered the shop in an inebriated state and were making obscene gestures at the women staff, the police reached the spot. When the policemen tried to stop them, the suspects started beating up the two in the parking area of the market and tore apart their uniform,” the police said.

Sanju was nabbed on the spot, while the second suspect managed to flee.

The injured ASI, Rajendra Singh, was taken to the Sector 6 Civil Hospital for a medical examination and treatment.

Didar Singh, in-charge of the Sector 25 police post, said they had registered a case in this regard and efforts were on to nab the second suspect. — TNS