Udayvir is chief of Zirakpur MC 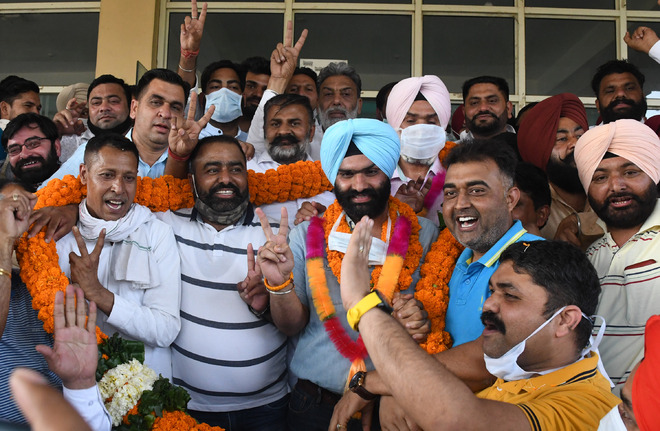 Congress candidates raised their hands in approval to elect the new president during a meeting convened by Dera Bassi SDM Kuldeep Bawa. The police did not allow mediapersons to enter the hall and witness the meeting in the MC office.

Son of Dera Bassi Congress in-charge Deepinder Singh Dhillon and first-time councillor, Udayvir said, “Allround development will be done in the city and illegal constructions stopped. Bringing water from the Kajauli waterworks will be my priority to end water shortage in the city.”

Dera Bassi MLA NK Sharma and eight Shiromani Akali Dal councillors left the venue after the oath-taking ceremony. Sharma said, “It is for the first time in the history of the Zirakpur Municipal Council that only the president has been elected while senior vice-president and vice-president have not been elected as per the rules.”

Deepinder Singh Dhillon, who was also present on the occasion, said, “The senior vice-president and vice-president will be elected unanimously at the next meeting.”

Now, Mohali to get Mayor on April 12

Zirakpur: A meeting to elect the Mayor, Senior Deputy Mayor and Deputy Mayor and the oath-taking ceremony of the newly elected councillors of the Mohali MC have been put off till April 12. Punjab had announced a gazetted holiday on April 8 in connection with the birth anniversary of Guru Nabha Dass Ji. Earlier, it was stated that this would not affect the April 8 meeting of the MC. Congress workers were left high and dry when the April 8 meeting was put off.