Not to appeal against demolition order 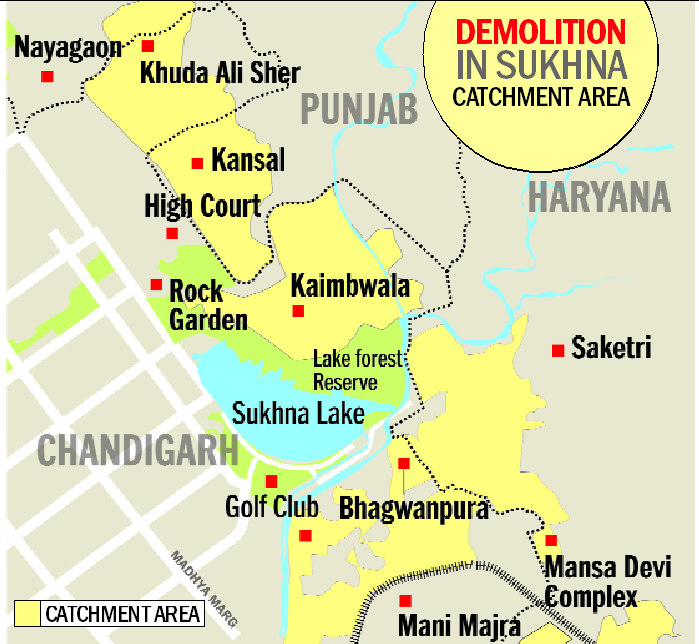 The Punjab and Haryana High Court's judgment in the Sukhna Lake case has not left Chandigarh high and dry. With a little constructed area in the Sukhna Lake’s catchment and Rs 200 crore ordered to fill its kitty, it has very little to lose and gain more. Not finding itself in troubled waters, it is not even filing an appeal against the orders.

“All commercial/residential and/or other structures constructed in the catchment area of Sukhna in Punjab, Haryana and UT Chandigarh as delineated in map of Survey of India on Sept 21, 2004, are declared illegal/unauthorised,” reads the High Court order.

On Monday, the HC directed the Punjab, Haryana and UT Administration, Chandigarh, to demolish all structures in the Sukhna catchment area. The HC had also directed Haryana and Punjab to pay Rs 100 crore each as special damages for restoration of catchment area of Sukhna Lake.

Manoj Parida, Adviser to UT Administrator, said: “We welcome the High Court order which is basically to protect Sukhna Lake. This order is blessings for our future generations.” Following the High Court order, more than 600 houses located in Kaimbwala village face demolition. Besides, two temples, a gurdwara and a dharamshala would also be razed. Dalip Kumar Sonu, husband of former Kaimbwala sarpanch Anita Devi, said the Sukhna Lake was constructed on the village land acquired by the government. He said even the catchment area of the lake was the agriculture land belonging to residents of the village.

He said the man-made lake came into existence a few decades ago, whereas the village existed here for time immemorial and now, the government wanted to throw them out from their ancestral land. Meanwhile, residents of Kaimbwala today met City BJP president Arun Sood on the issue who assured the villagers to take up the issue with the UT Administrator.

The affected residents of Kansal, Khuda Alisher and Kaimbwala village have also decided to convene a meeting tomorrow to discuss the outcome of the HC judgement and further steps to be taken to protect their houses.

In its order, the High Court had declared Sukhna Lake legal entity and ordered demolition of legal/unauthorised constructions in its catchment area within three months. The court also directed the Chief Secretaries of Punjab and Haryana along with UT Adviser to constitute high-power committees to fix accountability for “such large-scale” unauthorised construction.

All commercial/residential and/or other structures constructed in the catchment area of Sukhna Lake that fall in the areas of Punjab, Haryana and UT Chandigarh as delineated in the map prepared by the Survey of India on September 21, 2004 are declared illegal/unauthorised,” reads the order.

“The illegal/unauthorised constructions raised in the catchment area as delineated by the Survey of India Map dated September 21, 2004, falling in the areas of States of Punjab and Haryana and UT Chandigarh are ordered to be demolished within a period of three months,” the court further ordered.