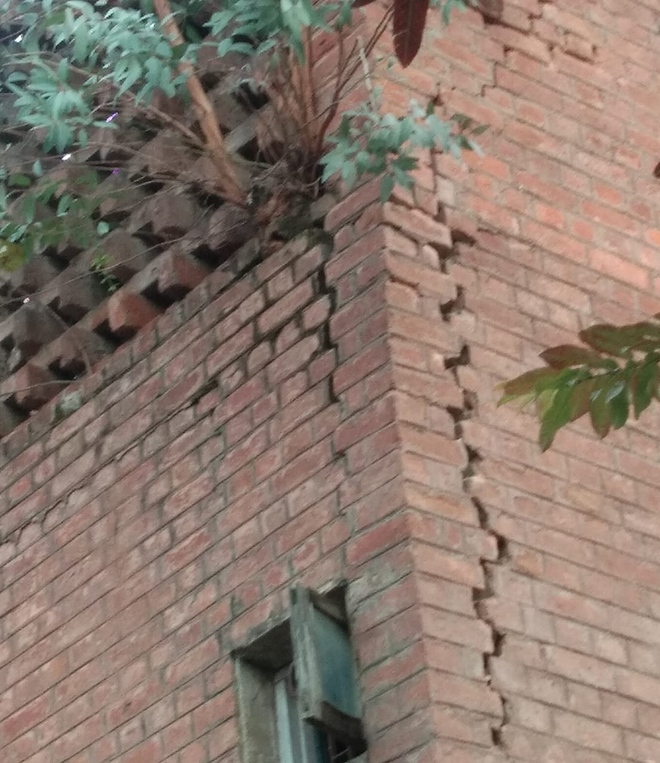 A huge crack threatens the structural strength of a government house at Sector 20-A in Chandigarh. Tribune photo: Pradeep Tewari

The UT Administration is considering to demolish single-storey government houses in all sectors in a phased manner.

A committee comprising officers of the UT Engineering Department and the house allotment wing has been formed to carry out a survey of such houses.

Sources said the survey was being conducted after the Punjab and Haryana High Court sought an opinion of the Administration and the Ministry of Housing and Urban Affairs on its proposal to demolish the old and dilapidated government houses in Sector 22 and raising multi-storied buildings in their place.

Though the Administration, in an affidavit submitted before the High Court, expressed its inability to demolish the old houses in Sector 22 due to the heritage character of the sector, it has started the process to identify single-storey and old and dilapidated government houses.

The High Court had sought the views while hearing a petition on the condition of government houses and cremation grounds in the tricity.

A UT official said the Administration has formed the committee to start the survey. The report would be placed before the High Court. The dilapidated houses may also be demolished if recommended in the survey. The entire row of houses will be demolished even if any of these is found in good condition.

The Chandigarh Administration is facing an acute shortage of government houses. It is providing houses to employees of the UT, Punjab, Haryana and the Punjab and Haryana High Court. There are about 15,000 government houses in the UT while the number of employees eligible for accommodation are around 40, 000.

Besides UT employees, those posted in Punjab and Haryana departments in Chandigarh can also apply for houses under the common pool policy formulated in the year 1996. Since the number of available houses could cater to only one-third of the eligible employees, the waiting period for an accommodation is 15 to 20 years at present.