Variation in the target population figure behind difference 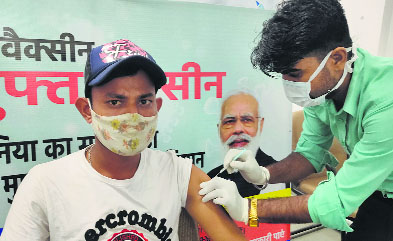 Even as the UT Administration has claimed that it has inoculated 80 per cent of the city population with the first dose of the Covid-19 vaccine, the Union Ministry of Health and Family Welfare has put the first dose coverage in the City Beautiful at only 33 per cent.

The data pertaining to Covid-19 vaccination coverage (as of July 15) was tabled in the Lok Sabha by the Ministry on Tuesday.

Chandigarh: The city on Friday reported one new case of Covid-19 and no fresh fatality due to the virus. A total of two patients were cured of the disease during the past 24 hours. TNS

Mohali: Five fresh cases of Covid were reported from the district during the past 24 hours taking the tally to 68,422. Meanwhile, one more patient succumbed to the virus while seven patients were cured of the disease. Among the new cases, one each came from Mohali, Dhakoli, Kharar, Boothgarh and Banur. No case was reported from Gharuan, Dera Bassi and Kurali. TNS

According to the Ministry, the target population of the city is 15,75,709, and by administering 5,20,502 doses, the coverage of the first dose stands at 33 per cent, while the coverage for the second dose was 8 per cent only (1,26,141 doses). The correct representation of the second dose coverage is 22.84 per cent as per the UT Health Department. As per the official records of the UT Administration, the target population of the city is 7,09,180. UT Adviser Dharam Pal had taken up the matter with the Ministry to correct the population target of the UT, but the correction has not been made so far.

With this discrepancy, Chandigarh now stands amongst the states with poor vaccination coverage of the first dose according to the Ministry’s database.

As per the Ministry, only two states come in the bracket of over 80 per cent vaccination coverage of first dose – Ladakh (83 per cent) and Lakshadweep (81 per cent).