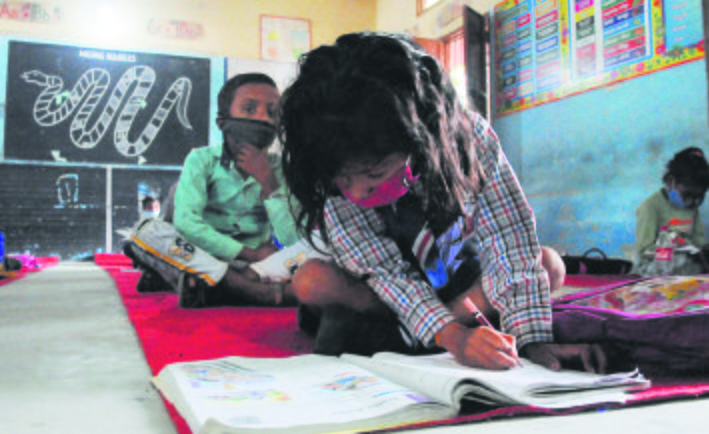 The Covid-19 vaccine for paediatric population is not imperative for the reopening of schools. This was stated by Dr Arun Bansal of the Department of Paediatrics, PGI.

Their cognitive learning being hit: Doctor

The schools should be reopened immediately, at least for Class V onwards. The cognitive learning, personality and nutrition of kids are being affected as they are not going to schools. The body mass index has increased resulting in obesity. Increased screen time is causing problems. — Dr Arun Bansal, Department of Paediatrics, PGI

“The schools should be reopened immediately, at least for Class V onwards. The cognitive learning, personality and nutrition of children are being affected as they are not going to schools. The body mass index has increased resulting in obesity. Increased screen time is causing problems,” said Dr Bansal.

“The disease severity is less among children and it has been observed that the proportion of kids infected in the first and second waves remained the same. Children have also been found immune in sero survey. Majority of them were found asymptomatic. Prioritising vaccination for reopening of schools is not the right approach,” he added.

“The vaccine will be rolled out in two-three months for children as well, but before that schools should be reopened. The right way forward is ensuring a safe environment for children where the school staff and adults around them are immunised,” he said.

Dr Piyush Gupta, president, Indian Academy of Paediatrics, said the academy constituted a ‘Task Force on School Reopening 2021’ and shared criterion to be followed at district or local level for reopening schools. He said the decision of reopening schools should be taken at the local level and not on the national level.

Dr Bansal shared that around 100 children with Covid-19 also suffered from multisystem inflammation syndrome in children (MIS-C), a condition where different parts of body can become inflamed, including the heart, lungs and kidneys. “This condition occurs after four to six weeks of Covid-19 in children. This is even more serious than acute Covid-19 disease. We were able to recover the patients.”