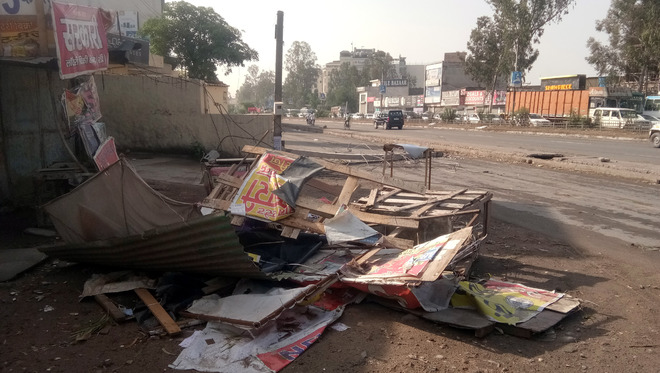 A windstorm caused large-scale destruction in Zirakpur and other areas of Mohali district on Tuesday night.

As many as 22 electricity poles were uprooted or damaged, disrupting the supply in most parts of the town till Wednesday afternoon. There was also a technical fault in the transmission line from Dhakoli to Mubarikpur.

PSPCL Executive Engineer Khushwinder Singh said, “Thirty-five of the 40 feeders had to be shut down due to strong winds last night and supply to most parts of the town was cut off.”

In addition, dozens of trees were uprooted and a part of the roof of the High Street Market on VIP Road was blown away. The maximum destruction was witnessed on VIP Road where hoardings, flex boards and windowpanes of several shops were blown away and broken. The overhead boards on shops came tumbling down and were strewn in the pathways.

At a place on VIP Road, an entire glass structure covering the wall fell off the first floor. Residents said illegal hoardings caused the maximum damage and put the lives of persons nearby in danger.

“As the high-velocity winds blew, hoardings, flex boards and windowpanes were blown away. People ran helter-skelter to get out of the harm’s way,” said Lokesh Thakur, a Savitri Greens housing society resident.

The Dera Bassi SDM has ordered a survey of the damaged property and assess the loss.

In Sector 67, Mohali, a car parked outside a house was badly damaged as a block of plywood fell on it.