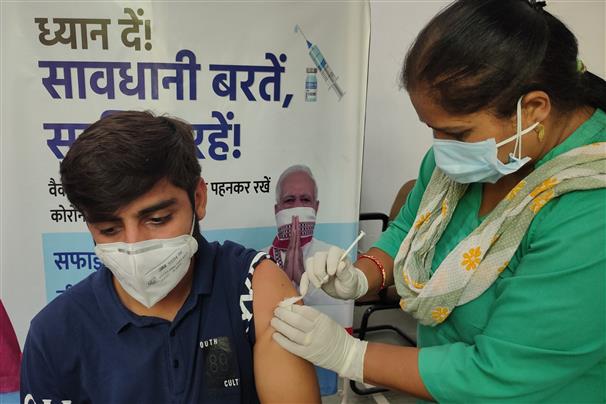 The Chandigarh Administration started the Covid vaccination for 18 years and above citizens in all government hospitals and dispensaries today.

The UT Administration started the Covid vaccination for 18 years and above citizens in all government hospitals and dispensaries today.

According to an official announcement by the UT Administration, “The citizens can avail of walk-in for on-the-spot vaccination facility. If citizens are not registered on the CoWIN portal, the staff at the vaccination centre will help them.”

The citizens having no identity document or phone number will be vaccinated without the documents at the Mani Majra Civil Hospital, Gurdwara Sahib Kishangarh, HWC Dhanas and HWC Bapu Dhaam/Grain Market.

Chandigarh: The city on Monday reported 14 new cases of Covid-19, taking the caseload to 61,444. The number of active cases has come down to 311 as 56 more patients were cured of the disease. TNS

Mohali: The district witnessed only 11 cases on Monday, taking the case tally to 68,048. Two persons succumbed to the virus, taking the toll to 1,039. Before this, no death had surfaced in the district for two consecutive days. As many as 69 patients were cured of the disease. Of the 68,048 positive cases reported so far, 66,599 patients have been cured. There are now 410 active cases in the district. TNS

Panchkula: The district on Monday added two Covid cases to its tally. These too tested positive on Sunday. “They had earlier shifted to their farm in Ambala, but later returned to Panchkula. Hence, they were added to the overall tally on Monday,” said the Health Department. The district witnessed one death. The death toll now stands at 371. While 30,066 persons have recovered from the infectious disease, 91 cases are still active. The recovery rate is 98.48 per cent. TNS