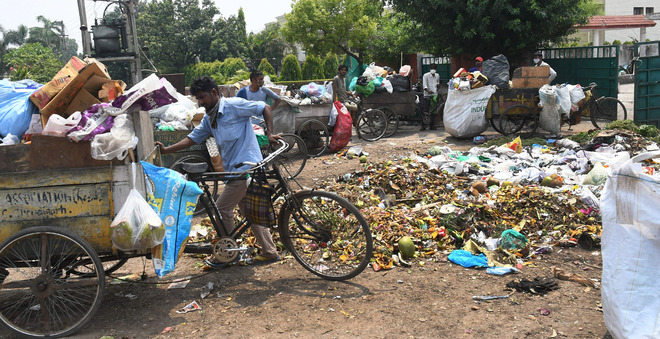 Last year, the MC had deputed nearly 100 such vehicles in UT villages, while 390 vehicles were later bought for a whopping Rs29 crore and deputed in different sectors in a phased manner from January this year.

These were bought to replace the existing rehris, but the latter are still in use, putting a question mark over the plan of the civic body to spend a huge amount on such vehicles when these are not being properly utilised.

Kuldeep Singh Gill, president of the Residents Welfare Association (RWA), Sector 21-B, said, “MC vehicles are parked at a particular spot and rehris lift waste from our houses. The collectors then segregate the garbage and take dry waste while the wet is thrown in the vehicles. Some rehris are directly dumping waste at the Sehaj Safai Kendras (SSKs). Why does the MC allow private collectors to throw waste at its SSKs.”

Joginder Singh, president, RWA, Sector 38-A and B, said, “Rehriwalas lift waste and throw it in the vehicles. They segregate the waste in an open area and keep the dry waste dumped in big bags. Due to the sorting of the waste in the open, residents have to bear with the foul smell. Besides, it is an eyesore.”

JJ Singh, president, RWA, Sector 48, said, “The old system of waste collection through rehris is still on in the entire Sector 48. The only difference is that the waste is given to vehicles.”

Hitesh Puri, chairman, CRAWFED, said, “We have been getting such complaints from Sector 22, 47, 48, 33, 21 and 38. In Sector 22, I have seen waste being lifted by rehris and later thrown in vehicles. What is the use of these vehicles.”

Sorabh Arora, MC Joint Commissioner, said, “There is some issue in Sector 21, but we have not come across any instance from other places in which carts are plying. Besides, due to a court case and other issues, we have not deputed vehicles in southern sectors.”