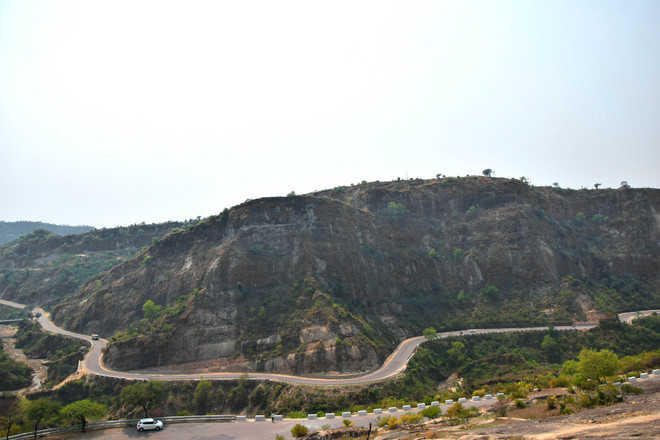 The chuckling mountains and wildlife are so far away yet so near with COVID-19 clearing the air, literally! The sweeping views of Shivalik hills, which normally remain screened owing to a thick haze for people of Chandigarh, now looks all the brighter and cheerful with reduced pollution levels giving a clearer view with the strict lockdown to limit the spread of coronavirus.

The phenomenon is limited not just to the hilly areas, but even in places situated on the foothills like Chandigarh.

For octogenarian resident Naresh Khullar, who spent his entire life in the city, the sight of hilltop Kasauli lights was always rejuvenating.

But he had to travel all the way to the rain-fed Sukhna Lake, which the Punjab and Haryana High Court last month declared as the living entity, to see the twinkling lights just for a few days during the peak monsoon season when the pollutants in the air largely washed away.

But now the refurbished car seller told IANS that he can see the mountains in a new light from his home in Sector 18, reminiscing the days of crystal clear skies of the city till early 1980s.

Chandigarh, some 250 km from the national capital Delhi, is located on the foothills of Shivaliks that are currently prone to heavy erosion.

"Now we can say 'taare zameen par' as they visible from my terrace," another resident and university student Deepak Bhasin said.

He said the brightest seven stars, which are visible to the naked eye, are also visible these days, indicating drastic reduction in vehicular pollution.

"My grandfather used to tell him that they were once clearly visible in Chandigarh's skyline. But this is the first time in my 25 years that I am seeing these stars and that too so clear," an excited Bhasin said, adding "We are now counting stars during night".

Another resident Atul Nehra believes the Milky Way bulge and COVID-19 will simultaneously disappear. "But till then I want to savour it every night." For another resident Mohan Jain, who served as one of the Additional Solicitor General of India, the lockdown has done which no government plan to save the environment could do.

"The countrywide lockdown and subsequent travel restrictions have done what scheme like the odd-even of a traffic rationing in Delhi could never do," Jain said.

The air quality index (AQI) of Chandigarh on March 31 was 40, a good range.

As per the Central Pollution Control Board, the AQI level of the city on March 29 was 17, the cleanest air among India's 101 towns and cities.

With the tighter restrictions around social movement, Chandigarh, ringed around the Sukhna Wildlife Sanctuary, is getting its guests out of woods.

Residents are spotting herds of the nilgai or the blue bull and the sambar, a large deer, strolling late in the evening in residential localities near the Sukhna Lake.

A leopard strayed into a plush residential area in Chandigarh on Monday morning, triggering panic among people.

The Sukhna Wildlife Sanctuary spreads over 2,600 hectares and is situated at one km in the north-east of the manmade Sukhna Lake that came into being in 1958.

It is home to a variety of butterflies, birds and mammals like the sambar, the spotted deer, the pangolin, the wild boar, the jackal, the small Indian civet, the jungle cat, the porcupine, the langur, the rhesus monkey, the Indian hare, the common mongoose, etc.

It is also home to a variety of reptiles including snakes like the cobra, the rat snake, the common krait, the Russell's viper and the Indian python. — IANS