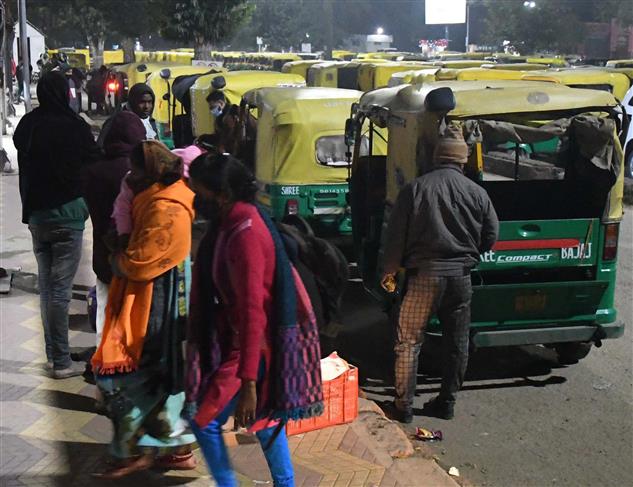 A queue of autos at the Chandigarh railway station. File photo

Safety has become a major concern for women travellers, who frequent the city railway station and board trains to their destinations almost every other week. While most of them prefer travelling during daytime, others who board the trains at night often try and shorten their sojourn at the station.

“I work at a private pharmacy company here. I go to my hometown in Dhampur, Bijnor, almost every week. I board a train from the city railway station. However, I do not feel safe at the station here,” said Parul Jatav.

She said poor lighting on the main roads leading to the station was one of the major worries and the absence of a direct path to the bus stop from the station also caused inconvenience to many like her.

“The road that turns towards the railway station from the traffic lights that may be half a kilometre away from the Kalagram traffic lights is not well lit at all. It has an open forest area on the side. If you board an auto to Panchkula, most drivers take that route. For Chandigarh, they take the Industrial Area route, which too is not that safe. There is also no direct way to reach the bus stop at the station. One has to cross car, taxi and auto parking to reach the bus stop. There should be a designated path for pedestrians to reach the bus stop,” she said.

“I usually take the morning train to Delhi, which has not been problematic at all. However, I reach Chandigarh by the evening train. Now that’s the time when I feel a bit scared not on the platform, but the area outside it. You can’t walk to the main road because auto drivers are bound to hound you,” said Pallavi Bajaj, who works with a private company in Delhi.

Rakhi Sharma from Dera Bassi, said: “I am leaving for Raebareli with my mother-in-law. I don’t feel too worried because my husband dropped me here and will see us off too. However, it’s a little perplexing to not see many women at the station after the sunset. I’ll feel a little scared to be here without my husband.”

GM Singh, DRM, Ambala, said: “I believe there is a law and order problem at the station and its circulating area because of a jurisdictional issue between the Chandigarh Police and the Haryana Police. We will look into the issues related to lighting too.”