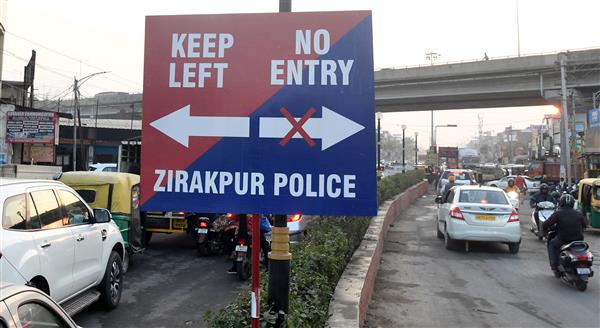 Vehicles ply on the wrong side of a road ignoring the no-entry board, near the traffic lights under the Zirakpur flyover on Tuesday.

The Zirakpur Municipal Council (MC) has installed signboard at all major roads of the town to streamline the traffic and guide the outside vehicles so that a jams can be averted at the busy intersection times in the town. The signboards caution the road users as they approach the intersections or indicate diversions.

The MC has installed signboards in several areas on the suggestion of the police to streamline traffic. We are trying our best to maintain the smooth flow of traffic in rush hours. Cops have been deployed at places where the probability of snarl-ups is high. Rajpal Singh, Traffic incharge, Zirakpur

Dera Bassi SDM, Zirakpur Municipal Council officials and Zirakpur traffic incharge Rajpal Singh had a meeting a few days ago to take steps to streamline the traffic on the congested roads.

Signboards have come up at Patiala chowk, Old Kalka Road and in Baltana areas.

Zirakpur traffic incharge Rajpal Singh said, “The MC has put up signboards in several areas on the suggestion of traffic police to streamline the flow of traffic. The police are trying its best to maintain the smooth flow of traffic in rush hours. Cops have been stationed at places where the probability of snarl-ups is more.”

Besides streamlining the traffic, the police are removing vendors from the Patiala chowk on a daily basis to avoid choking of the road.

Road users who do not traffic rules, wrong parking, jump red light, break queues and take the wrong lane are aggressively being fined.

“On an average 40 to 50 challans are issued to offenders,” Singh said.

The police said 40 traffic challans were issued on Monday while on Sunday 10 were fined for wrong parking, 20 for speeding and 25 for jumping the red light. The old Kalka road has become a hotspot these days with traffic coming from Panchkula choking both the sides of the road at the Patiala chowk.