39 soon, but far from tired to retire

Like Serena Williams, arguably the greatest woman tennis player of all time, Yuvraj Singh does not need to prove anything. Born a few weeks after Serena in 1981, he too wants to fight on in 2020, the worst year in collective memory of the world 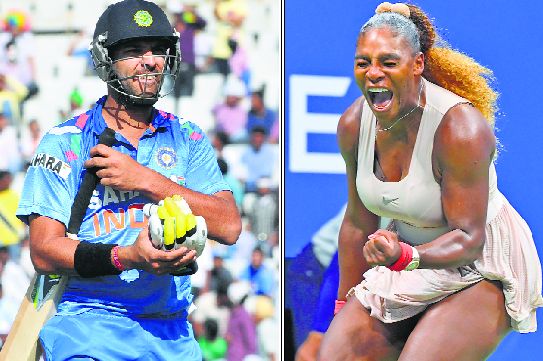 Yuvraj and Serena (right) — when sport is in your blood, it’s very difficult to give it up. File photo The Tribune/Reuters/Robert Deutsch-USA TODAY Sports

When sport is in your blood, it’s very, very difficult to give it up — only age and a lifetime of physical pain can drag someone such as Serena Williams away from the court. Serena turns 39 in less than two weeks; she has a full life, bringing up her little daughter and pursuing a career in fashion designing. But tennis has been her life — she started playing at age four, turned professional at 14. But there’s something else. A player named Court has been keeping Serena on the court for some time at least; Margaret Court, the great Australian player, owns the all-time record of 24 Grand Slam titles, won from 1960 to 1973. Margaret was some player: she won a total of 64 Grand Slam titles — 24 in singles, 19 in women’s doubles and 21 in mixed doubles. Being second behind such a player is no dishonour.

Serena is the greatest woman tennis player of all time — but this is a subjective view, though shared by most analysts. The only objective measure of greatness is mathematical — and according to that, Serena lags Margaret by one. It’s been so for the last three-and-a-half years, since Serena won her 23rd Grand Slam at the Australia Open in 2017. She missed the rest of the Grand Slams that year to take a break for the birth of her daughter.

Since making her return in 2018, she has lost four Grand Slam finals, including to first-time winners Naomi Osaka and Bianca Andreescu.

Time is running out for Serena to overtake — or to perhaps even match — Margaret Court.

The French Open begins on September 21. Serena will be there, and on September 26, she would blow 39 candles on her birthday cake in Paris. She will be pursing Margaret in another Slam there, but it seems increasingly unlikely that she will get to the 24th. And in the face of Serena’s matchless spirit, numbers and records seem increasingly insignificant.

Our own Yuvraj Singh

We too have a great who turns 39 this year, on December 12. Yuvraj Singh wants to return to cricket, to play for Punjab. He carries a sense of injury — he believes he was unfairly overlooked for the 2015 World Cup, unfairly dropped in 2017.

Team sports are brutal — you can be a good player but the number of players in a team is limited; you could be dropped for the team’s failure, for strategic reasons, or because you may not be part of the plans of your captain or coach. No one can drop Serena, she can play on even if her ranking drops down to 200; but a player could be dropped due to a variety of reasons — age, strategy, bias, for example.

Last year, Yuvraj retired from most cricket, excepting T20 or T10 carnival leagues across the world. Now he plans to return for Punjab in the coming domestic season, playing “at least T20 cricket”.

Yuvraj made his Ranji Trophy debut for Punjab at age 15 in 1997; he has played 64 matches in the country’s top First Class tournament; to his great credit, 31 of these matches were in the second stage of his career, when he was trying to re-establish himself in the Indian team after recovering from cancer.

Like Serena, Yuvraj doesn’t need to prove anything; born a few weeks after Serena in 1981, Yuvraj finds that he still has some fire left in the belly. He too wants to fight on in 2020, the worst year in the collective memory of the world. Hope his passion for cricket will keep him unsullied by the increasingly mucky politics of the Punjab Cricket Association.