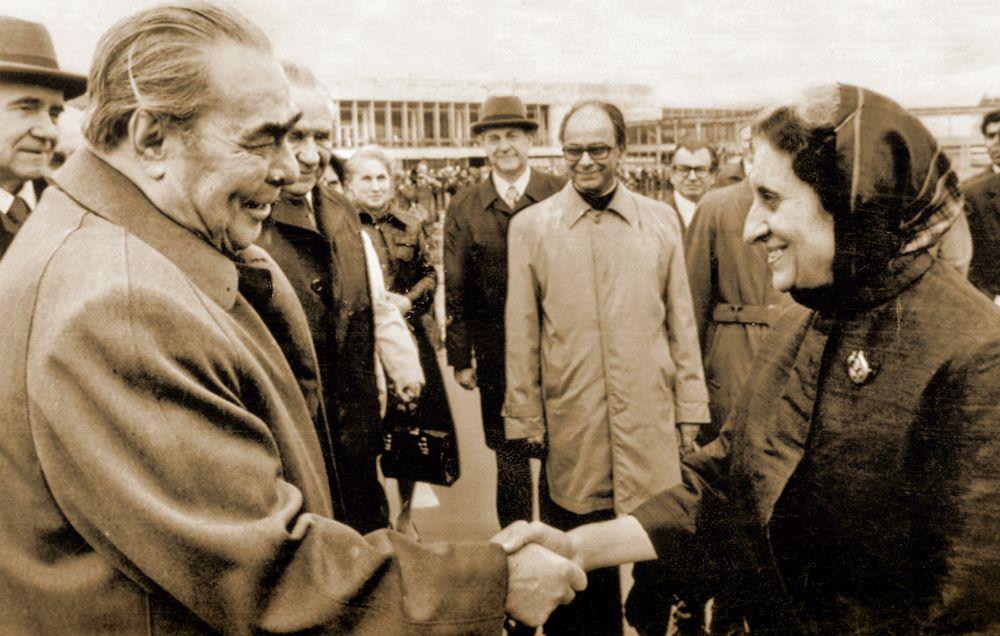 historic: The then PM Indira Gandhi with Soviet leader Leonid Brezhnev. The treaty was among the most significant documents signed by India after Independence. File photo

The ‘Treaty of Peace, Friendship and Cooperation Between the Government of India and the Government of Union of Soviet Socialist Republics’ was signed fifty years ago on August 9, 1971. It is now history as is the Soviet Union, which imploded in 1991. The treaty is also almost completely out of Indian public memory; but it was diplomatically and strategically among the most significant documents signed by India after Independence. This is because it immensely contributed to this country’s ability to successfully meet one of the greatest security challenges it has faced in the past seven decades. And within this challenge lay a very great strategic opportunity which India positively realised through the break-up of Pakistan.

It is difficult now to appreciate the critical situation that confronted the country on several fronts in 1971. The domestic political situation had been shaken by the Congress split in 1969. In order to consolidate her position, PM Indira Gandhi was beginning to take the country further down on the road of socialism. She had also brought forward the General Election by a year, to March 1971. She achieved a decisive victory, but within weeks of her taking oath of office for a third time, the immediate external environment became grave because of internal developments in Pakistan.

Elections were held in Pakistan, then under the military dictator Gen Yahya Khan, in December 1970. The Awami party led by Sheikh Mujibur Rehman won 167 out of 169 seats allotted to East Pakistan. The number was sufficient to enable him to form the national government. However, the army and the politicians of west Pakistan refused to hand over power to the Awami party. They were convinced that once in power Mujib would create conditions for East Pakistan’s secession. This was incorrect, for Mujib desired autonomy not secession. A facade of working out a compromise to break the political impasse was enacted by the army and Bhutto. But that was a cover for a brutal and bloody crackdown on East Pakistan launched on March 25.

The Pakistani army’s genocide in East Pakistan led to a grave security situation for India as refugees began to cross the border; their number eventually grew to a crore. The overall implications of hosting them were unbearable. They had to be sent back but Pakistan was unwilling to create the conditions that would make that possible. The atrocities against the population—and Hindus were specially targeted—also led to general popular pressure on Indira Gandhi for military intervention. The armed forces needed time to prepare. As the months passed, it became evident that the Western powers led by the US had no real sympathy for India’s predicament and their major objective was the maintenance of Pakistan’s territorial integrity. As India prepared for military action, it helped the East Pakistani resistance.

In 1971, Pakistan also played a vital role as a go-between to help the US and China establish contacts. This process culminated in Henry Kissinger’s dramatic and secret visit to China from Pakistan in July 1971. It earned Yahya Khan the great gratitude of President Richard Nixon who wanted to go down in history as the American leader responsible for the breakthrough with China. Nixon was also antipathetic towards India and had an irrational personal dislike for Indira Gandhi. This and larger geopolitical fears led him to overlook the Pakistani army’s genocide against its own people. Apart from warning India against taking military action, the US also encouraged China to take military action, should India militarily intervene in Pakistan. And, Sino-Indian relations were cold and hostile while Sino-Pak ties had become firm, based on a shared hostility with India.

In this situation, India simply had to possess the cover of a security assurance from the Soviet Union, even if that superficially impaired the tenets of non-alignment. This was provided by Article IX of the treaty which stated inter alia, ‘In the event of either Party being subjected to an attack or a threat thereof, the High Contracting Parties shall immediately enter into mutual consultations to remove such threat and to take appropriate effective measures to ensure peace and security of their countries’. This gave India the confidence that the US and China would not consider directly and militarily intervening in the conflict. The Soviet Union stood by India but the record is believed to show that it too cautioned India against seeking the disintegration of West Pakistan. Despite that, the treaty had served the Indian purpose.

The treaty was a product of a global situation and the evolution of Indo-Soviet relations. It also created a positive sentiment for the Soviet Union in Indian decision makers and added to the relationship, especially in the security sphere. Did the nature of Indo-Soviet ties in the 1970s and the next decade circumscribe Indian options as India’s geopolitical environment changed adversely with the Soviet ingress into Afghanistan in December 1979? India did privately convey its unhappiness at Moscow’s Afghan policy but the nature of bilateral ties prevented it from taking an adverse public position. During the 1980s, India sought to open up with the US but its strong Soviet connection and its public position on Afghanistan was a barrier in this process. It was also in this decade that Pakistan became nuclear, with the US looking the other way. India could effectively do nothing about it.

After the end of the Soviet Union, India signed a treaty of friendship and cooperation with Russia in 1993, but with the omission of an Article like IX of the 1971 treaty, it was very different, and gradually the nature of the India-Russia ties has become radically different. The halcyon years of the 1970s and 1980s are now a remote memory, but both countries remain committed to each other’s territorial integrity as enshrined in their constitutions. Meanwhile, Sino-Russian relations have become fundamentally transformed in this century. Article 9 of Sino-Russian treaty of friendship of 2001 is almost identical to Article IX of the Indo-Soviet treaty of 1971. The two countries recently decided to extend the treaty by five years.