Punjab has been experiencing a perennial crisis of deteriorating soil salinity and declining health of the people in the countryside because of the deleterious effects of contaminated water and soil sources. Farmers and politicians are silent about it because the state still produces record harvests. The government, policy wonks and the farmers should have been grappling with these challenges, but they have not been doing so. 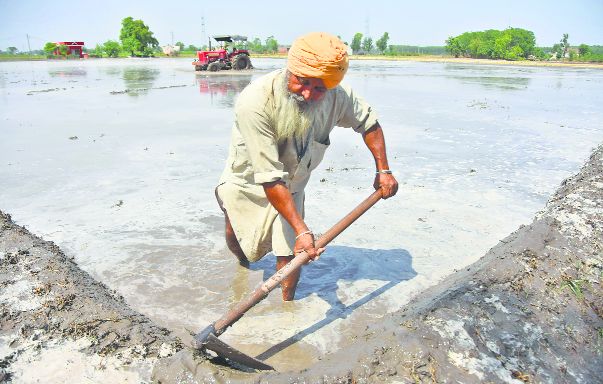 Ground Reality: The government can’t handhold the farmer for too long. Tribune photo

ON the face of it, the maximalist position of the protesting farmers that their lone demand is the repeal of the three deregulatory farm laws, and the Modi government’s position that they will talk with the farmers, give assurances and even accept some amendments but will not withdraw the laws, look like a deadlock, with no way out for either side. What seems to bother the farmers is that the Minimum Support Price (MSP), which serves as a guarantee, is in danger of being whittled despite the government’s repeated assurances. That is why they seem to insist that the MSP be brought on to the statute book. And there are reasons why the government is hesitant to do so because then it would have to buy up agricultural produce across the country, which it would not be able to do.

It remains a foggy conflict because the issues have not been clarified on either side. The government is sticking to its rhetorical mode that these laws will benefit the farmers without explaining how they would do so. The truth of the matter is that the deregulation is for the government to partially wash its hands of certain of its recurring welfarist commitments. The government is not able to sustain the procurement bill, and it is not even able to create the required storage space. It would have been better if Prime Minister Narendra Modi and his Cabinet colleagues had explained the government’s difficulties and assured the farmers that they would intervene whenever there is an imbalance in the farmer-private trader transaction. There is a provision for this in the law relating to contract farming, but it is not there in the law pertaining to dissolving the mandi jurisdiction. The argument that the farmer has the freedom to sell his produce to anyone is at best a half-truth. Union Minister for Law and Justice, Information Technology and Telecom Ravi Shankar Prasad telling a private television news channel that a farmer in Samastipur rang up a dealer in New Delhi and he got a price much higher than he could have ever got, and that the truck from the trader picked up the farmer’s produce on the doorstep is a fairy tale, and he knows as does everyone that this is not how the system works. The Delhi trader must have agreed to buy the produce because there must have been a demand for it at that moment in the Delhi market.

It is a fact that the government cannot handhold the farmer for too long. The temporary concessions, usually made as an election promise, like free power and increased MSP, become entrenched and no government or political party dare withdraw them once the need is over. Secondly, there is the real issue that the trader can refrain from buying the produce when he feels that the price is high, and he would prefer not to do any transaction in the grain market. The free market is a lovely idea and it is an ideal state of things, but it does not perform perfectly. What the government needed to do was to put all the cards on the table. The private traders would have to buy grain in the harvest season, and they must buy at a minimum price, which may not always follow the MSP. Of course, the crop insurance policy is a protection against the vagaries of weather like drought and flood, but not against the vagaries of the market. Agricultural experts are also aware of the fact that the MSP is based on input costs, and an increase in MSP to the tune of one-and-a-half times more than production costs is an unrealistic promise, which the governments may not be able to fulfil.

There is the paradox in Punjab’s agriculture. It has been experiencing a perennial crisis of deteriorating soil salinity and declining health of the people in the countryside because of the deleterious effects of contaminated water and soil sources. Both the farmers and politicians are silent about it because the state still produces record harvests. The government, policy wonks and the farmers should have been grappling with these challenges, but they have not been doing so. Right from the 1990s, there have been suggestions that there should be crop diversification in the state, and that there is a need to move away from staple cereal crops like rice and wheat. This could have been achieved if the MSP for horticultural produce was greater, and successive governments could have easily achieved the shift. But it has not been done because the demand for horticultural produce was not stable enough. Punjab’s farmer is in many ways trapped in cereal cultivation. The innovative way out is for the governments to pay the farmers cash incentives for not growing rice and wheat every second year.

There are lessons to be learnt from neighbouring Haryana, where creeping urbanisation has lured farmers to sell their land at attractive prices, but it has led to anomie because the cash surpluses were not leading to alternative investments. Some of the farmer families have moved into real estate, which is volatile in economic and social terms. In Punjab, too, the social ramifications of an apparently successful agricultural revolution caused social turbulence through widespread drug addiction, rise in cancer cases, people moving away to foreign countries as migrants with all the tribulations that follow. It is for the leadership of the communities to find ways of maintaining stability through education, alternative career paths and a value system.

Behind the massive farm protests lies a social abyss which no show of political strength can hide. The Modi government’s simplistic solutions of so-called market reforms of the agricultural sector are a far cry from the crisis plaguing all aspects of Punjabi society. The farmer-government political and economic tussle is but a sideshow.