A case to make MSP legal right of farmers : The Tribune India

A case to make MSP legal right of farmers

If the US, EU, Canada and other big players can subsidise exports of agricultural commodities or export at prices which are actually below the cost of production, why should Indian farmers be penalised for it? International prices should, therefore, not be treated as a benchmark for fixing MSP for domestic farmers. 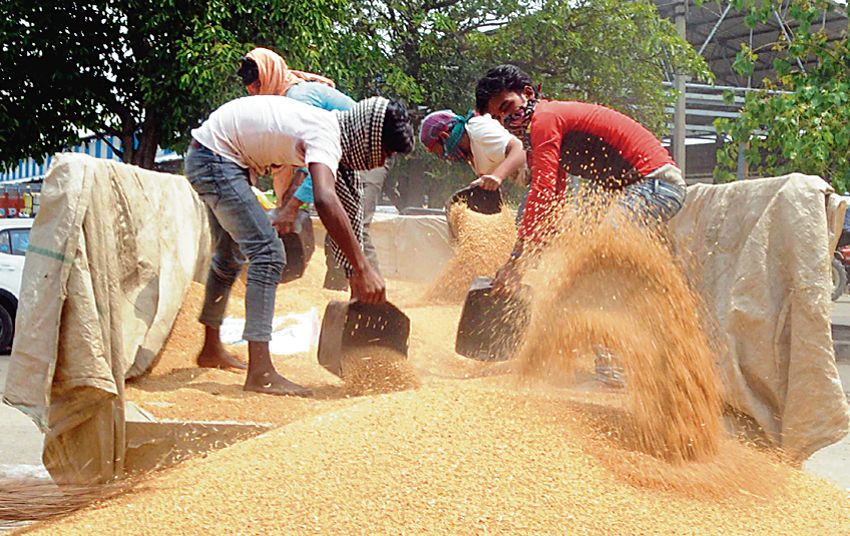 Farm income: International price parity for crops is a subject of debate.

It was in 2003 that the heads of state of four west and central African countries — Benin, Burkina Faso, Chad and Mali — wrote a joint proposal to the World Trade Organisation (WTO) asking for scrapping the massive cotton subsidy support being given in the US/EU, which depresses global prices. At the same time, in a signed letter published in the New York Times, these leaders had said: “Your subsidies kill our farmers.” An international uproar erupted, and it virtually led to the collapse of the Cancun WTO Ministerial Conference.

As the West African challenge to the rich developed countries on the contentious issue of cotton subsidies clearly demonstrated how easily market prices were manipulated, hitting the livelihoods of farmers in another part of the world.

Several studies, among them from Oxfam International, the International Food Policy Research Institute (IFPRI) and the Catholic social justice organisation, CIDSE, had analysed the issue in depth. Accordingly, the US had spent $14.8 billion in just four years, between 1998 and 2002, to subsidise a cotton crop valued at $21.6 billion. Some other news reports showed how, in addition, the US provided a subsidy of $1.7 billion every year to the textile industry to buy the subsidised cotton.

This brought down the global prices, pushing cotton farmers in west Africa to suffer economic losses.

If these cotton subsidies were to be removed, studies showed that nearly 25,000 cotton growers in the US (at that time) would have incurred an average loss of $871 per acre. On the other hand, imagine the economic loss for the four west African countries (better known as Cotton 4) which had only four per cent of the global cotton area but relied heavily on exports.

Lower international prices meant lower price realisation for the African cotton growers. What impact the artificially low international prices had on cotton growers from the developing and least developing countries is provided by another World Bank study which worked out that a 40 per cent drop in cotton prices leads to a 21 per cent reduction in farm income. Drop in farm income, in turn, results in a 20 per cent rise in poverty.

Subsequently, in a case filed by Brazil against the US cotton subsidies, the WTO Dispute Panel in 2005 did acknowledge that some of the cotton subsidies indeed reduced global prices.

In another interesting study, Sophia Murply and Karen Hansen-Kuhn of the non-profit Institute for Agriculture and Trade Policy (IATP) had worked out the cost of ‘dumping’ agricultural commodities on the global markets for five major crops America exported — wheat, corn, soybean, rice and cotton. This interesting research project, initiated by Mark Ritchie, IATP’s founder, has certainly made a significant contribution in understanding how ‘dumping’ influences global trade.

Accordingly, in 2017, the US was dumping wheat at an export price that was 38 per cent less than its cost of production. Similarly, cotton was exported at a price that was 12 per cent less (despite the west African challenge), corn at nine per cent, and soybean at four per cent less. The authors also observed a consistent pattern that America followed in dumping these commodities for over two and a half decades, barring a few years in between.

Whatever be the ‘dumping’ size, what emerges clear is the role that these subsidies, often hidden, have on lowering international prices. In 2018, the OECD countries, comprising the richest trading block, provided agricultural subsidies to the tune of $246 billion. Along with unfair trade practices, these subsidies have always played a significant role in protecting developed country farmers against price volatilities, cotton being a classic case.

More recently, another IATP study entitled Milking the Planet explains how in a bid to remain competitive, European dairy corporations are dumping cheap dairy products and, in turn, pushing small dairy farms out of business in developing countries. Along with EU, the US too has been heavily subsidising milk and milk products. In a joint representation before the WTO in 2017, India and China have said that dairy (and also sugar) continues to be in receipt of a high product-specific support in America for over a decade.

Similarly, the EU provides a product-specific subsidy support of 71 per cent of the value for its production for butter and 67 per cent for skimmed milk powder (SMP), thereby pulling down global prices.

How the FOB (free on board) prices actually hide the massive subsidies is better illustrated by a careful look at the wheat subsidies being provided in America. As per the non-profit, Environmental Working Group (EWG), the US has given a subsidy of $47.8 billion to wheat growers between 1995 and 2019 (there are 29 heads under which these subsidies on wheat were given, a few of these may have discontinued now). These subsidies actually encourage overproduction, thereby reducing market prices.

The big trading agencies gain in the process. Also, what needs to be understood is that if markets were offering a higher price to wheat growers in America, I see no reason why the US should have provided such a huge subsidy support to wheat growers over the years.

If the US/EU/Canada and other big players can subsidise exports of agricultural commodities or export at prices which are actually below the cost of production, why should Indian farmers be penalised for it? International prices should, therefore, not be treated as a benchmark for fixing MSP for domestic farmers.

India must ensure that regardless of the global prices, domestic farm incomes grow in the same proportion as other sections of the society. To begin with, make MSP a legal right for farmers, as the Commission for Agricultural Costs and Prices (CACP) had earlier recommended. Follow this up with direct income support to fill the income shortfalls so as to realise the dream of Atmanirbhar Bharat.