Sedition charge is being brought against anyone critical of the government 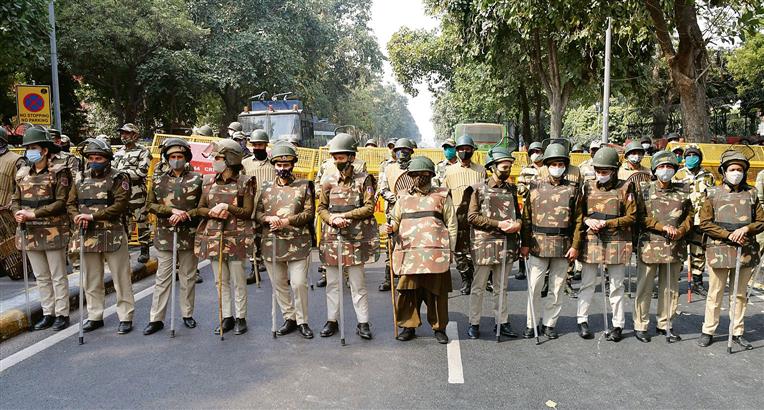 State’s might: Farmers, activists, journalists and stand-up comics are all in the firing line now. Tribune photo

I marvel at the insatiable appetite of the Modi-Shah government and its satraps in the BJP-ruled states to take on every opponent who dares to oppose its policies and actions. It reminds me of the Great Khali and his tribesmen in the world of freestyle wrestlers, all brawny men. They challenge anyone who cares to oppose them to step into the arena and fight!

It does not appear that Shashi Tharoor or Rajdeep Sardesai or Mrinal Pande had deliberately or otherwise thrown their hat in the ring. Yet, they became the objects of ire because in their hurry to be the first to break the news, they individually tweeted that a protesting farmer on a tractor had died by a bullet injury in the melee that took place in Delhi on Republic Day. They had watched on TV a tractor breaking the police cordon. It was travelling at what could be considered reckless speed. If the police present there to stop the tractors at a predetermined line was forced to take a split-second decision, I would not fault them if they had fired and thereby prevented others from resorting to similar tactics. Both the police and farmers were keen to show restraint, and a genuine misunderstanding on the part of some journalists and a political opponent could, and should, have been overlooked.

However, our brand of the Great Khalis took advantage, more than umbrage, of the tweeters mistaken notion that the farmer had died in police firing, and filed FIRs against Shashi Tharoor and the journalists, accusing them of causing dissension between communities and sedition, of all things! The recourse to accusing opponents of the government of sedition has become a standard practice with the police in particular, despite the Supreme Court’s clear view that sedition is not to be cited unless the clear intention of fomenting violence and civic unrest against the lawfully-installed State is apparent.

Incidentally, this government has developed the fine art of turning legal process into punishment, knowing fully well that the case will not stand the test of legal scrutiny. The Unlawful Activities Prevention Act (not yet applied to this case) makes it almost difficult for the judiciary to release the accused on bail. So, if the trials linger, as they always do, the arrested persons are kept in judicial custody interminably. Some of the Bhima Koregaon detainees have spent more than three years in prison without trial, which in a democracy is unacceptable.

Stan Swamy, a 83-year-old Jesuit priest, whose mission in life was to stand up for the rights of Jharkand’s Adivasis, has spent close to four months in jail, with no hope of the trial beginning in the near future. When his request for bail was heard by the designated judge, the Public Prosecutor declared that Fr. Swamy was ‘accomplishing the agenda of the CPI Maoists’! The NIA in its charge sheet in the Elgar Parishad case had described the 30-year-old People’s Union for Civil Liberties (PUCL), a human rights body, as a frontal organisation of the banned CPI (Marxist)! These accusations do not have the ring of truth.

BJP ministers, the late Arun Jaitley, and Ravi Shankar Prasad, were associated with the PUCL, which was born out of the Emergency of 1975, and was founded by no other than Jai Prakash Narain! The PUCL is a well-known rights organisation and many citizens respect the intentions of its members and appreciate the work it has accomplished in the sphere of human rights.

The SC should study the UAPA and its use by the government to convert its process into actual punishment. Should people accused of unlawful activities be kept in jail for years together without trial in a civilised society? As a Jesuit priest, conditioned to obey his superiors, I cannot envisage this old man helping the Maoists in any manner. He would be contravening Church diktats and could even be defrocked if this were true.

But reverting to the original reason for this article and that is this government’s anxiety to rid itself of all critics of its policies, I have a gut feeling that the list of such opponents of the regime is lengthening so fast that the government will have to expand its security arms exponentially to keep pace. It was the cattle traders and beef eaters to begin with, then the left-wing students at the JNU and Jamia Millia, the anti-CAA/NRC protesters, the farmers opposing laws that were supposed to ameliorate their quality of life, stand-up comics and cartoonists poking gentle fun at these policies or their implementation, the Muslim boys in love with Hindu girls, and now the journalists who in their hurry to ‘break the news’ repeated what they were told by the dead man’s relatives.

I know Rajdeep Sardesai personally. His father was the one and only Test cricket player born in my ancestral state of Goa. He was my friend. His mother was the daughter of a senior member of my own service, the police. PM Pant retired as the police chief of Modiji’s own state of Gujarat. His grandmother’s brother, Gen GG Bewoor, was the Army Chief and his great-grandfather, Sir Gurunath Bewoor, ICS, was my father’s immediate boss as the Post-Master General of Bombay Presidency. My association with his family goes back 85 years when I was a boy of six.

But just as I am troubled by the sedition charges against Rajdeep, I am also troubled by the continuous assaults by this government on all and sundry who do not concur with its policies and actions. Is it that Mr Modi and Mr Shah do not want any opposition at all in this land of argumentative Indians? Or are they keen to follow the Chinese path where no contrarian voices are heard?

All along I had imagined that their goal was a ‘Hindu rashtra’ which, like Pakistan, would ensure that only the majority religion would determine the course of events and politics. But now I am confused. Farmers, journalists and stand-up comics are also in the firing line. Just like they would have been in China!