A revival of Chipko spirit needed in Chamoli : The Tribune India

A revival of Chipko spirit needed in Chamoli

Ironically, at the centre of the latest disaster is Raini village, which was the site of the Chipko movement that sowed the seeds of people-centric environment activism in India. In the past two decades, local movements against large hydel projects have sprung up in Uttarakhand. Several public interest petitions, court orders and fast-unto-death by environmentalists have not had any impact on the attitude of governments at the Centre and in Uttarakhand towards hydropower. 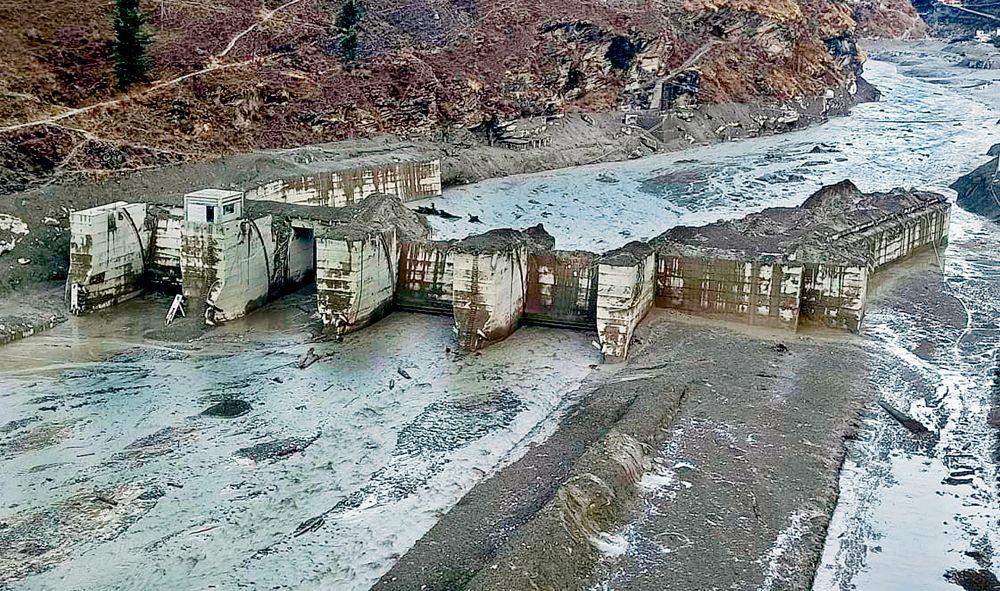 Catastrophic: Proponents of hydropower projects keep inventing new ways of circumventing environmental norms which can amplify the impact of a disaster. PTI

The Himalayas once again witnessed a massive disaster on Sunday morning. The analysis based on satellite imagery of the region from Planet Labs, a company formed by former NASA scientists, shows that the flash flood was triggered by a rock slope that got detached from a large glacier, resulting in an avalanche of rocks and ice which moved downwards at a high speed.

According to some Indian experts, the avalanche was caused by the detachment of a hanging glacier from the bedrock hosting it, some 20 km upstream of the Rishiganga hydel power project. Yet another explanation is that the detached rock slope slipped into a glacial lake or accumulated melt water held together by natural rocks and debris.

Irrespective of whether it was a massive landslide or a Glacial Lake Outburst Flood (GLOF), the event caused colossal destruction downstream and nearly washed away two hydroelectric power projects.

While the exact sequence of events will become clear over the next few days following field surveys, the connection of any such disaster with climate change and environmental destruction is inevitable. In the past six decades, the entire Himalayan range has recorded a rising trend of extreme warm events, drop in extreme cold events and increasing variability in Western disturbances as well as snowfall in certain regions in the western Himalayas, according to report of climate change in the Hindu Kush region prepared by the Kathmandu-based International Centre for Integrated Mountain Development.

These climatic changes affect availability of water in glacier-fed rivers and also result in formation of lakes of glacier melt water. Warming temperatures play a role in glacial destabilisation and help in basal melt which can trigger ‘wasting’ events like the one seen on Sunday morning. Both the number and size of glacial lakes has shown an increasing trend in the past three decades, enhancing the risk of GLOFs. The melting of high mountain permafrost due to warming too is increasing the probability of rock avalanches from steep slopes. Such avalanches can reach glacial lakes and trigger GLOF. Studies have put the number of glacial lakes between 4,000 and 8,000 spread across the entire Hindu Kush Himalayan region. In the central Himalayas, this number has risen from 644 in 1990 to 796 in 2010.

In view of this scenario of climate change and increasing threat of landslides and GLOFs occurring due to it, a two-pronged policy response is required. First and foremost, we need to study and monitor glaciers and glacial lakes on a continuous basis. A beginning has been made in this regard. Some glacial lakes are being monitored. For instance, the south Lhonak glacial lake in Sikkim has been ballooning. It has spread to 126 hectares from 18 hectares in 1976. The size of the Geepang Gath glacial lake in Chandrabhaga basin in Himachal Pradesh is estimated to be expanding by 0.025 square kilometre every year.

The number of glacial lakes in the Ravi, Chenab, Sutlej and Beas basins has also gone up between 2013 and 2015. Such monitoring studies have to be intensified and made widespread. It can happen under the overarching existing framework of the National Mission for Sustaining Himalayan Ecosystem.

India has gained considerable experience in polar research through multiple research laboratories in the two poles: the Arctic and the Antarctic. This can be leveraged to develop permanent research bases and stations in the third pole — the Himalayas. A beginning has been made in this direction by the National Centre for Polar and Ocean Research of the Ministry of Earth Sciences which has established a high-altitude station, Himansh, in Spiti, at an altitude of 13,500 ft. The third pole research endeavour should cover all aspects of climate change, glaciology, hydrology, livelihoods, agriculture and so on.

For the mitigation of natural disasters such as glacial lake bursts and landslides, early warning systems have to be developed and implemented. Engineering solutions such as siphoning water from identified glacial lakes is also an option, as experimented in the south Lhonak glacial lake in Sikkim. It is a logistically challenging task involving the transport of pipes etc to points in inhospitable terrain. In Himachal Pradesh, scientists are monitoring changes in the Parechu glacial lake.

The evidence coming from research should form the basis of policymaking and planning of development projects in the hills. For this, climate change and environmental concerns will have to be mainstreamed in all development activities, be it the construction of hydroelectric power projects or grand projects like the Char Dham Pariyojana.

It has been observed that hydropower projects can amplify the impact of catastrophes such as the one that occurred this week, besides disturbing ecological conditions in the construction phase. Proponents of projects keep inventing new ways of circumventing environmental norms. The Char Dham project was broken into 53 smaller projects just to evade the mandatory environment impact assessment (EIA) studies.

A series of smaller hydropower projects is proposed in one valley for the same reason. While the EIA process may be fudged, the cumulative environmental impacts of such projects can’t be avoided. For instance, springs are getting dried as the natural hydrology that brings water to them is disturbed. Landslides have been more common. Projects are sanctioned, subject to observance of certain environmental conditions, but compliance is not monitored. For instance, muck from the construction of roads and other development works is routinely dumped on slopes and riverbeds.

Ironically, at the centre of the latest disaster is Raini village, which was the site of the Chipko movement that sowed the seeds of people-centric environment activism in India. In the past two decades, local movements against large hydropower projects have sprung up in Uttarakhand. Several public interest petitions, court orders and a fast-unto-death by environmentalists like Prof GD Agrawal have not had any impact on the attitude of governments at the Centre and in Uttarakhand towards hydropower, irrespective of the party in power. It is time to revive the spirit of Chipko in the hills to prevent cascading disasters from happening in future.