A softer touch could have won people over

KPS Gill’s view was that we needed to consolidate our gains from Black Thunder II by mopping up the terrorists’ collaborators. This view prevailed. My view that it was the correct moment to win over hearts and minds was rejected. It took four or five years more for the country to be rid of the ravages of Khalistani terrorism. 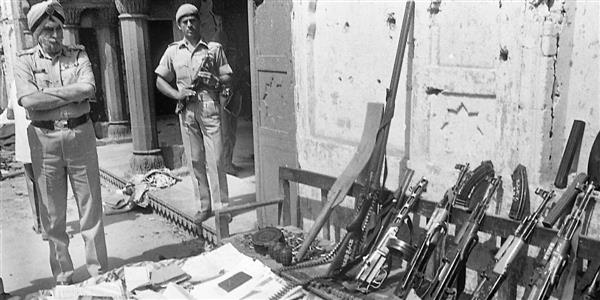 Standing firm: A section of the sarpanches wanted KPS Gill to stop the cordon-and-search operations, but he thought otherwise.

I go back to my days in Punjab. Specifically to the Black Thunder II operation as it unfolded before my own eyes and in relation to the classical method of combating the ‘nationalist’ form of terrorism.

Let me start by explaining what the ‘nationalist’ form of terrorism is. It was manifested most clearly first in Northern Ireland and then in Spain where the Basques resorted to terrorism in their quest for a separate state of their own. It was felt that merely eliminating brainwashed terrorists does not solve the problem since the ‘nationalist’ form is based on emotions and sentiments. When a terrorist is brought down, his place is immediately taken by one or even two replacements, who are motivated by emotions.

Hence, though neutralising the killers is a must, it is even more important to befriend the community from which the terrorists hail. Winning hearts and minds should be the main objective of the State. This is done by ensuring justice in dealings with ordinary members of that community, recruiting some of them in the security forces, the Army and particularly the police and making them participants in decision-making. Experts have dubbed this as the classical method of meeting the menace.

It is with this objective in mind that I would personally interact with villagers, asking them to recount any instances of injustice or overkill by my men to demonstrate the State’s commitment to justice for its own people while, at the same time, reiterating our resolve to rid the populace of killers of innocents. When Chaman Lal joined us as IGP in charge of the border districts, these interactions became even more frequent and intense.

KPS Gill replaced me as Punjab DGP sometime in April or May 1988. It was while I was away undergoing surgery for prostate in my city, Mumbai, that the government decided to ‘kick me up’, in a manner of speaking, as an adviser to the Governor as the state was under the President’s Rule. Half of the portfolios, routinely held by ministers, were allotted to me. The Governor retained the rest. I was happy with this turn of events as it was much easier to gain the trust of the common man when you are not seen to belong to the enforcing arm of the State!

In this new role, I met many citizens with grievances. I heard them out patiently and provided them with whatever relief I was legally empowered to provide. I met sarpanches too. Half a dozen of them met me one afternoon and insisted on my accompanying them to inspect a ‘road’ that was completed in the books of the PWD but whose construction had not even begun! I did not believe that such a scam was possible, but the sarpanches knew better. They were right. I had to place the superintending engineer under suspension and start the mandated inquiry against him.

And with these introductory remarks about my new role, I proceed to recount from memory my role in Black Thunder II. One late morning, I received a call on my office phone from the young SP of Amritsar city that terrorists holed up in the Golden Temple had shot at SS Virk, the DIG of the CRPF, who was inspecting his troops on duty around the perimeters of the temple. The bullet had broken the officer’s jawbone. This had infuriated his men, as well as Punjab policemen who regarded Virk as their own because he hailed from Punjab and had earlier been seconded on deputation to Punjab from my own state, Maharashtra. The young SP, Suresh Arora, wanted me to allow him to enter the gurdwara to take out the culprits. Suresh had not been able to locate DGP KPS Gill for instructions. I, too, was not able to locate him. His office had no clue of his whereabouts. Inquiries at his residence drew a blank. I told Suresh to hold his horses. Entry into the gurdwara needed political clearance. I spoke to Buta Singh, the Union Home Minister. He alerted the National Security Guard (NSG). They arrived early next morning and reported to me in the Circuit House at Amritsar where I was camping after my arrival from Chandigarh the previous evening.

KPS reported some time after the NSG did and took charge of the operation. In the course of the next few days, KPS, the Governor and I flew into Delhi almost every day to keep the Prime Minister and Buta Singh informed of the progress of the operation. KPS was in a hurry, but the Director of Intelligence Bureau, MK Narayanan, was more circumspect. His eyes and ears told him that haste was not called for because the Sikh villagers had realised that the terrorists had crossed the Lakshman Rekha and hence stopped the tacit support they were lending. They had decided not to respond to the Akali demand to come out in droves to protest the temporary pause to the maryada, the recitation of Guru Granth Sahib in the Golden Temple 24x7.

At one stage, KPS ordered the NSG to accompany him into a part of the gurdwara even though going there had not been sanctioned by the PM and the HM. He phoned me before dawn for my clearance! Of course, I counselled patience. KPS had made a great mark on the world stage with the live broadcast of Black Thunder II. He worked tirelessly from morning to night and his physical personality and bearing contributed tremendously to the success of our mission. He sent the IGP (Border), Chaman Lal, to request me not to come to the site of the operation. That may have detracted from the credit he deserved and so I went along with his wish. He deserved full credit, not to be shared with any other functionary!

A dozen sarpanches called on me in the Circuit House after the terrorists surrendered. They pointed out that the people had lost all respect for the ‘boys’ who used to say they were fighting not for themselves but selflessly for the community, the ‘quam’. They wanted KPS to stop the cordon-and-search operations and the house searches he had ordered the CRPF to carry out. I felt that their request was justified, but KPS thought otherwise.

The matter was argued by me and him in front of Governor Siddhartha Shankar Ray. KPS’s view was that we needed to consolidate our gains from Black Thunder II by mopping up the terrorists’ collaborators. This view prevailed. My view that it was the correct moment to win over hearts and minds was rejected. A genuine opportunity to get the Jat Sikh farmer on our side in the war against terrorism was lost! It took four or five years more for the country to be rid of the ravages of Khalistani terrorism.