A voice in the wilderness 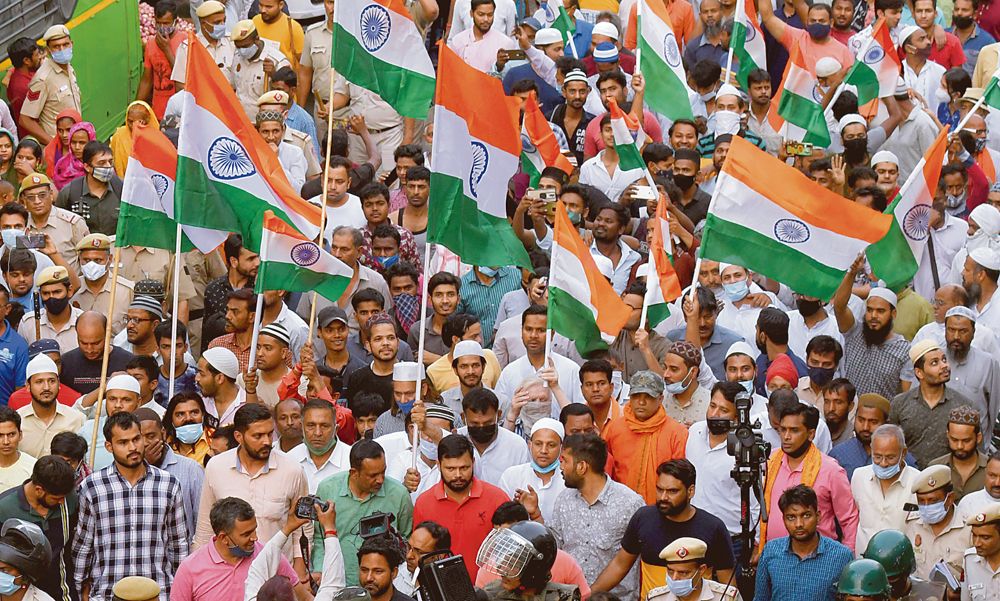 Be warned: If the Muslims are alienated, no amount of surveillance and cops on streets will be sufficient to suppress the desperation that will be unleashed. Tribune photo

I have no quarrel with the 200 prominent retired judges, bureaucrats and armed forces veterans who came out in favour of our Prime Minister, and, by association, with the Sangh Parivar, in reply to the public letter our Constitutional Conduct Group (CCG) published last week. My views may not be exactly similar to that of the 107 other ex-colleagues of the IAS, IFS, IPS, and other Central services who signed the CCG letter. It is not practical to expect over a hundred to voice exactly the same views but the mathematical principle of the lowest common denominator will always apply when so many sign a common letter. So it must be with the subsequent letter signed by the 200!

It is alleged that the Constitutional Conduct Group is attempting to spread mistrust and grab international attention. Nothing could be more ridiculous than that!

Why I have no grouse against the 200 is that I do believe that they too have a right to influence public opinion. There could be many more ‘left of centre’ advocates in my group. If at all, there may be only a sprinkling of these in the larger group or, more probably, none at all! In my own extended family, many voices and opinions will be heard. Also, in my circle of friends. The religious fervour to counter Islamic fervour has definitely crept in after 2014.

What alarmed me is that the group of 200 has questioned our motives! It was alleged that we as a group are attempting to spread mistrust in the country and grab international attention. Nothing could be more ridiculous than that!

I am genuinely worried (in fact, convinced) that the pursuit of the politics of hate and divisiveness spells disaster for this country. It will affect the economy, something that the PM is greatly concerned about. When disturbances become a normal feature of life on the streets, the sentiments of investors and businessmen are impaired.

If the biggest minority in the country is alienated through systematic attacks on their means of livelihood and their religious practices, no amount of increased investment in Intelligence and surveillance and in uniformed policemen on the streets will be sufficient to suppress the nature and the extent of desperation that will be unleashed.

Also, the regime’s policies (unstated but understood by its followers) will spawn vigilantes drawn from the lumpen elements who will be difficult to bring under control after the desired results are attained.

My ex-colleagues allege that my group is ‘actually fuelling the politics of hate that they seek to combat by engineering hate against the present government’. Is this ‘engineering hate’ something in which former IAS, IFS, and IPS officers are adept? Perhaps some who have worked in an Intelligence agency are used by governments (every government, in fact) to use ‘dirty tricks’, if required. But among the 108 who signed the CCG letter, there is none experienced in such skulduggery.

The other group parrots the Sangh Parivar’s mantra against the Partition of the country, against jihadi terrorism and secularism. Also, there is the constant reference to violence in West Bengal. No regime in power in Bengal could deal with the volatile nature of the enraged Bengali and his propensity to adopt violence as an instrument of keeping the opponents in check.

Jihadi terrorism is a constant headache. The Indian State has never failed to meet this threat head-on. The belief that one religion is the only true one (which it is not) is the cause of much misunderstanding. It is an age-old problem, of Abrahamic religions in particular, and will continue till education and wisdom dispel such notions. Many practices in Islam, like hijab, are abhorrent to modern cultures. But repression and laws will not end such practices. Only reformers like Kemal Ataturk in Turkey of old can influence rigid minds.

The Parivar has consistently called those like us who consider ourselves secular as pseudo-secularists! What that term signifies I do not know, just like I am not able to figure out what second-class citizenship that members of a minority, like me, would be consigned to in a Hindu Rashtra means! The Parivar keeps such interpretations vague, thereby spreading fear and inducing subjugation.

The peeve about the Partition and the complicity of Mahatma and Nehru cost Gandhi his life and turned Nehru into a permanent whipping boy of the Parivar. Extremists like Pragya Thakur have found favour with the Parivar.

If the Partition had not taken place, one scenario is that the Hindu-Muslim ratio would be closer to 60:40 than the present 80:20 that Yogi Adityanath talks about. Would jihadi terror be better controlled if Muslims constituted 40% of the population? My friends in the group of 200 should ponder over the probabilities.

Since my ex-colleagues are better placed than the group of 108 to influence the thinking of those in power, I appeal to them to use their clout with the government to order the Parivar’s stormtroopers to desist from tormenting Muslims.

Pro-Modi and anti-Modi views are almost evenly divided among those who are Hindus. This is the position among my Hindu friends of many years. There are many also who maintain a studied silence in the presence of a Christian friend, I presume. I respect them as well. Those descended from forward castes are, I admit, more likely to be protagonists of a Hindu Rashtra. They have nothing to lose, maybe something to gain.

A body called Hindus for Human Rights has come out strongly against the persecution of the Muslims. They belong to different religion-based or community-based organisations from around the world, mainly the US. There are individual Hindus who have also signed the petition. I salute these true followers of Hinduism, a way of life to which my ancestors in Goa belonged. Their open letter assured me that the CCG is not alone in its cry for justice and compassion!